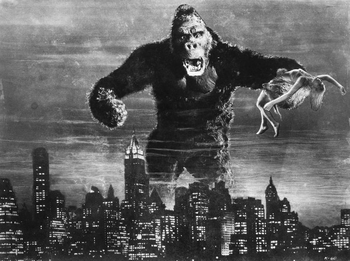 "And lo, the beast looked upon the face of beauty. And it stayed its hand from killing. And from that day, it was as one dead."
— (Fictional) Arabian Proverb
Advertisement:

"The Eighth Wonder of the World!"

With those words, RKO Pictures introduced one of the most well-known and enduring movie monsters of all time. "Kong" is a giant gorilla living on a hidden island in the South Pacific. When a charter ship travels to this island, the oversized primate becomes enraptured by the crew's sole blonde woman, whom the island natives offer up to it in sacrifice. The crew rescue the girl and even manage to capture Kong, bringing the creature back to Manhattan for a spectacle. However, Kong escapes and causes mayhem in the streets of New York before being shot off the top of a skyscraper.

The original 1933 film has had two official remakes, along with numerous spin-offs, sequels, crossovers, and parodies. Retellings in other media range from a Direct to Video animated feature in The '90s (The Mighty Kong for those curious), to an Australian stage musical in 2013 (a Broadway production of this version, with significant changes to the song list, spent a few months on Broadway over 2018-19).

Between the 1933 and 1976 films, King Kong also famously appeared in King Kong vs. Godzilla, released in 1962 and featuring King Kong battling Godzilla, in an exemplar of Cool Versus Awesome. King Kong was beefed up by a hundred feet or so and given lightning-based Eleventh Hour Superpowers so that he could manage an incredible turnaround against the Big G after getting a bad case of The Worf Effect, infamously getting him to eat his goddamn veggies

. The movie ends with both of them falling into the ocean, but King Kong emerging alone. King Kong would return in King Kong Escapes, also produced by Toho.

Kong: The Animated Series involves a much more heroic, cloned version of the original ape helping a group of plucky teens race an evil mastermind to be the first to collect all of a series of magical stones. The show's human hero (who was also a DNA donor for this show's version of the big ape) could cybernetically combine with Kong to make him more of a match for the villain's own monsters. Received a Spiritual Successor in Netflix's Kong: King of the Apes, which even copies from TAS's theme song. There was also an earlier animated series about a heroic King Kong in the 1960s, The King Kong Show.

King Kong has also long enjoyed a presence in the literary world, helped by the original 1932 novelization becoming public domain. Two sequels in particular have been created, After King Kong Fell by Philip José Farmer which places The Shadow and Doc Savage on scene after the great apes fell from the Empire State building; and Kong Reborn by Russell Blackford which has a dried blood sample found on the Empire State building leading to Kong being cloned and brought back to Skull Island.

The most diverse and widespread literary incarnation is by the works of Joe DeVito working in tandem with the Cooper estate. His most famous work, Kong: King of Skull Island serves as both a prequel and sequel to the original film by having the son of Carl Denham returned to Skull Island to find his estranged father and learning of Kong's upbringing as well is the origin of his species and the history of the natives. The story and its accompanying illustrations were adapted into comic book form by Dark Horse Comics. Later on Boom! Studios would partner up with DeVito to create both the series Kong of Skull Island which borrowed heavily from the novel as well is creating a variety of short series and one shots. DeVito's work continues with a variety of illustrations and short pieces set in his novel's universe as well as a crossover story entailing Kong getting free of the transport ship and ending up in Africa in Will Murray's King Kong vs. Tarzan. In 2022, Disney picked up the television rights to the Joe DeVito books to produce a series for Disney+ to be headed by James Wan.

King Kong has been the basis for two attractions at Universal Orlando Resort. The first attraction, known as Kongfrontation, was among the opening day rides at Universal Studios Florida in 1990. Based off the 1976 remake, the ride had guests board the Roosevelt Island trams and come face-to-face with the giant ape during his rampage in New York. The ride was suddenly closed in 2002, a decision that lead to much backlash from both fans and the general public. In response, a new King Kong attraction would eventually be built at the neighboring park, Universal's Islands of Adventure, in 2016. This new ride, titled, Skull Island: Reign of Kong, is loosely based off of the 2005 remake and follows an expedition to Skull Island that quickly goes awry as guests get several close encounters with the island's inhabitants before coming across Kong himself in a battle between him and a Vastatosaurus Rex trio. Both of the attractions were inspired by scenes from the tram-based Studio Tour at Universal Studios Hollywood; the former attraction was modeled after the King Kong Encounter sequence (which operated from 1986 until 2008, when it was destroyed in a backlot fire), while the latter attraction was based off of the King Kong 360 sequence (which was built in 2010 to make up for the loss of Encounter).

Legendary Pictures, fresh off their success with Gareth Edwards' Godzilla remake, produced Kong: Skull Island. Standing alone from previous versions of the character, this King Kong will be part of a Shared Universe, the MonsterVerse with Legendary's Godzilla, with the two meeting in Godzilla vs. Kong in 2021.

Kong remains one of the most iconic monsters of movie history, spawning numerous imitations and parodies.