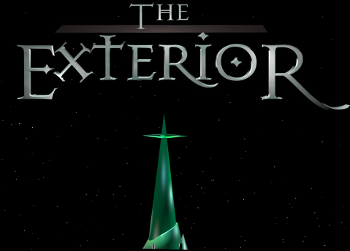 Awful modeling combined with lousy image editing skills. That's what we all wanted!

The Exterior is a four-part fantasy/science fiction film series in development by the unofficial Finnish "filming company" Nosources Movies. It is probably one of the movies whose idea is frustratingly difficult to explain, partially because of its complicated plot and partially because the developers change the storyline constantly.The basic idea is that two Finnish teenage boys, Arthur Starling and Samuel van Michael fall inexplicably into an interdimensional portal called a "Timeshred". They find two Pencils that have supernatural, godlike abilities, after which return into their homeworld (Earth), where they find out that they have been away for twenty years (instead of two weeks), and have been proclaimed dead. They go back into the other universe, where they begin a new life, and find out about strange mythologies of the world. Later they decide to build a great empire with the Pencils to control the universe. They do so, and name their empire the Exterior. And that's only the beginning of the first film... The whole synopsis  After two years of construction, the empire is complete, and Arthur and Samuel are respected as Emperors. However, a mythological creature called the Count of Night executes a plan which leads them to believe that his master, the God of Dreams is awakening from his deep slumber. They hire a magician called Leksa Lepääjä to stop the awakening, but due to the interference of the Count of Night, the God of Dreams quite ironically awakens. Soon enough, the world is going to chaos: Samuel mysteriously disappears, there's a revolution in the empire, and Arthur is labeled traitor of the country. The first film ends with the now-evil imperials capturing and torturing Arthur and Arthur making a contract with the God of Dreams to free himself.In the second film, Arthur awakens in the body of the Count of Night (who was previously killed by the light avatar Sun Wizard), makes his way into the dark Land of Dreams and back, and receives a quest to find the Crystal of Shadows for the God of Dreams. He travels all around the Exterior evading imperial forces, interacting with citizens and meeting a Light creature called Kasuga, who is also looking for the Crystal – to destroy it. Arthur doesn't reveal his true intentions, and the two team up. At one point, they are separated; Arthur later finds the Crystal inside a mountain, brings it to the Land of Dreams, breaks it and sacrifices his life to repair it.In the third film, Arthur awakens in his old body, which has been thrown into a junkyard. He makes his way to consult Leksa Lepääjä once again, as he doesn't now know what to do – he is a lonely creature against the whole world. Leksa tells him to go find the Shadow Lord Vladimir, who can teach him Shadow magic. Arthur spends the next year in Lord Vladimir's manor, where he discovers he's turning into a Shadow creature, hunts animals, and ultimately becomes the new Count of Night. He finds out there's a civil war between the current Emperors, and then attacks the empire's capital city, Latva, to get his retribution. He conquers the galaxy-sized palace almost single-handed with the help of a small army of Shadow creatures. This is followed by long negotiations with the imperials, and Arthur ultimately gains command of half the army of Latva for leaving the city alone. Then he walks outside and is immediately captured by the new Emperor, General Saskai, who takes him into the city of Juuri.During the trip to Juuri, Arthur finally meets Samuel again. He has been traveling in time for... quite a long time. In the fourth film, Arthur and Samuel invade Juuri, get captured a few times, fight against both the armies of Juuri and Latva and, surprisingly, find Kasuga again. Arthur also loses his Shadow powers and gains a lot of others. There is a battle, and Juuri is ultimately destroyed. Then there's another battle, this time in the sacred Sun Mountains – the sides are Arthur, Samuel, his army, the Sun Wizard, Light creatures and the newly awakened God of Sun VS the God of Dreams and the Shadow creatures VS General Saskai and the imperials. Arthur, Saskai and the God of Dreams die, Samuel wins and the Light creatures are left alone for good. Samuel then forms a New Empire.

So far, Nosources Movies has only produced the first film, but they have done it twice and are planning to do it thrice, as they have changed the plot a lot since the first edition. This page has tropes that occur in the current editions. However, the full plotline is ready, and the names of the four films will be: note  Originally the series would consist of nine films instead of four. The films would have been: Revolution (the first film until the point of Arthur's trial), The Desperate Escape (rest of the first film), Land of Dreams (first half of the second film), The Quest for the Shadow Crystal (second half of the second film), Secrets of Shadows (third film until the attack on Latva), Corrupt and Conquer (rest of the third film), Against Your Own (the battle of Juuri), War of the Mountains (first half of the battle of Sun Mountains), and The Last Battle (second half of the battle of Sun Mountains).

The Exterior provides examples of: