WARNING: Only spoilers from the current season (Season 3) are whited out.

The Four Horsemen of the Apocalypse 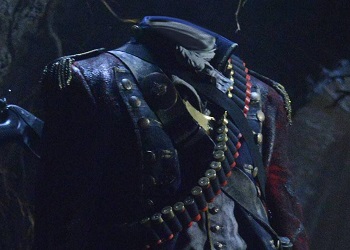 "I was supposed to be the hero of this story! Not the villain!"
Click to see the Headless Horseman in his human form. 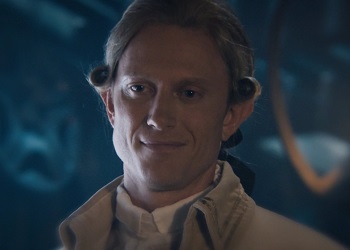 An undead man who sold his soul to Moloch after being killed by The Shadow Warriors. His head was later severed by his former best friend, a former history professor-turned Revolutionary War captain Ichabod Crane, causing him to become known as the Headless Horseman.

Both Abraham and Crane were later resurrected in 21st-century Sleepy Hollow, where he was revealed to be the First of the Four Horsemen of the Apocalypse: Death.

The Third of the Four Horsemen of the Apocalypse. He appears as a Japanese Samurai wielding a bow riding a black horse. 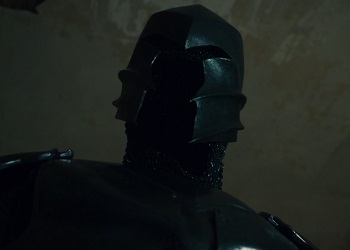 "War isn't coming to Sleepy Hollow. It's been waiting here all along."
Played By: John Noble

One of the four horsemen. 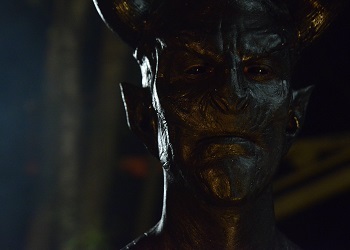 "Be grateful for the chance to sacrifice yourself for my glory."
Portrayed by: D.J. Mifflin, Derek Mears, Luke Smith

"The God Demon of Child Sacrifice," with the goal to bring forward the Apocalypse. As such, he was responsible for the raising of the Headless Horseman.

Moloch's appearance is sometimes blurred out, but he appears as a humanoid, with claws, horns, and demonic voice, speaking Greek. It has demonstrated invisibility, knowledge in magic spells, telekinesis, teleportation, and massive strength. He resides in the parallel dimension known as "Purgatory." 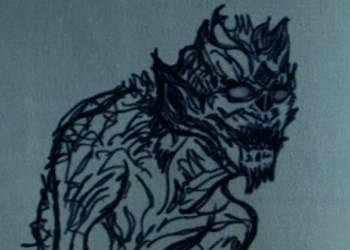 "You think that will protect you? That trinket? Your faith?"
Played By: Lyndie Greenwood, Judd Lormand, Karen Beyer, Matthew Mercurio, Michael Roark, Nicholas Gonzalez, Amandla Stenberg, Nydia McFadden
"And the Lord's light shone true and unmasked the wretched creature. Cast from his vessel and unable to cloak his true face."

Minor Supernatural Antagonists and Monsters Of The Week

Played By: Marti Matulis
"You have been weighed on the scales and found...wanting."

An evil dream spirit, attacking people in their dreams.

A vicious beast resembling a humanoid stitched doll. He was the protector of Ichabod's son Jeremy. 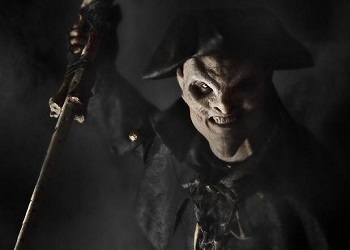 Not the Pied Piper, but a Pied Piper. A mercenary who sold his soul to Moloch, but wound up betrayed by his employer. Now he exists as a curse on the mans descendants.

A local legend of Sleepy Hollow. A supposedly benign spirit that begins attacking women close to Crane. Her real identity is that of Mary Wells, Ichabod's former fiancée, who died while trying to win him back; responsible for her return from the dead is Henry, who once more wants to cause trouble for his father.

A deadly creature of Algonquin legend, the wendigo is half man and half animal, a predator that has an intense hunger for blood and human organs. Fighting him is made very difficult for Abbie due to him being the son of her old mentor, Sheriff Corbin.

A demonic monster that feeds on a person's life force, choosing its victims by seeking out people who bear a strong desire for another. Secret desires are especially attractive to them. This flavour of succubus is known as the Incordata, or "The Heartless", as in that it has no heart which is stored separately from its body.

An ancient creature that guards the Sword of Methuselah.

Played by: Cynthia Stevenson
"Some of us aren't strong enough to bear the burden. They need an angel of mercy to help them cross over, to free them from pain."

Gina Lambert was a nurse employed by Tarrytown Psychiatric in the 1950s, where it was discovered she was murdering her own patients. She was executed for her crimes, but now haunts the hospital where she used to work and forcing people to commit suicide. 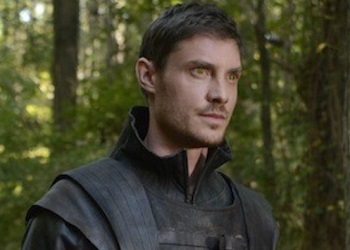 "My blade will cleanse humanity of its ills."
Played by: Max Brown
"I was locked in purgatory for over 200 years. Since I've been free...sunrise, the call of a bird...rare pleasures indeed."

A zealot angel who escaped Purgatory. As a former member of the Heavenly Host, Orion wishes to purge the world of all sin.

Played by: Daniel Thomas May

A small time painter, temporary member of Washington's social circle, notorious people-hanging blood-draining serial killer. He committed a heinous series of murders in the 1770s until he was trapped in an enchanted painting by Abigail Adams and Reverend Knapp.