Characters / A Song of Ice and Fire - House Tarth

This is a listing of members of House Tarth who appear in A Song of Ice and Fire. 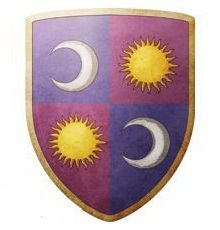 House Tarth of Evenfall Hall is a noble house from Evenfall Hall in the stormlands. The family rules Tarth, a beautiful island northeast of Shipbreaker Bay that controls the Straits of Tarth between the island and mainland Westeros. They are one of the main houses sworn to Storm's End.

Their blazon is quartered with yellow suns on rose and white crescents and azure. Their words are not known. Lord Tarth is sometimes called the Evenstar.

A woman who was blessed (or cursed) with being large, strong, and, above all, deemed to be ugly in a society where it is a woman's duty to be attractive to men. Honorable and stubborn to a fault, she's big and brave, even by the standards of honorable men. Because she could never have the traditional role of a woman in this medieval society, she has trained herself as if she were an anointed knight; which in turn means that she spends her time repeatedly bumping very hard against the glass ceiling. Often mocked as "Brienne the Beauty".

Septa of House Tarth, who taught Brienne when she was a young girl.