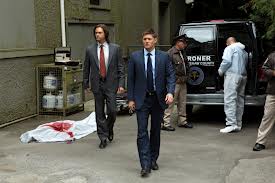 "Awesome." —Dean
"In a World... where nothing is as it seems, one brave, shockingly-handsome, virile young man, and his faithful, learning-disabled, robotic manservant must battle through waves of cybernetic asshats in order to sexually liberate the women of..."
—Michael Wheeler

Dean and Sam find two dead bodies and a laptop computer with film footage that not only tells the story behind the dead bodies but also gives them a new perspective about themselves and the monsters they hunt.

For this episode = 2 humans and 3 werewolves.