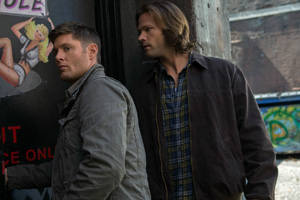 “Really? Our king daddy monster is a stripper?” -Dean
Dean: Wow, guy goes to Purgatory for a year, and all hell breaks loose. Check this out. A jogger in Minneapolis gets his heart ripped out.
Sam: I'm guessing literally.
Dean: Only way that interests me.
Advertisement:

Dean catches wind of a case where victims' hearts have been ripped out in a ritualistic manner. The brothers find that a suspect is already in custody, but mumbling and seemingly in a trance.

For this episode = 5 humans.