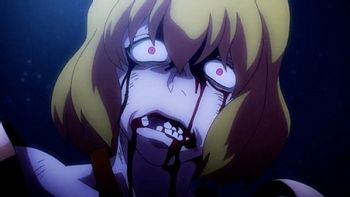 Overlord has no shortage of Nightmarish moments but unfortunately, most of those gruesome moments have to be read instead of seen due to the Anime cutting it short.

In fact, the scenes that the anime decided to adapt leave out quite a lot of the spicy gore that the Light Novel treads itself on, and as such you'll always get a kick out of reading the horrible fates of those who go against the Supreme One, Ainz Ooal Gown (or those unfortunate souls who cross his loyal followers, whom are tormented endlessly without anyone caring)!