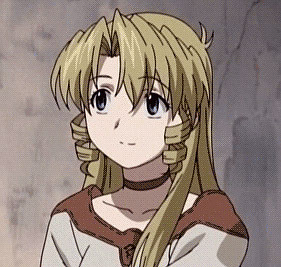 And she's supposed to be hiding her status.

An easy way to tell if a female character in Japanese media is of high social standing is not to look for the Requisite Royal Regalia, but to look at the front of her head. Specifically, look for two curled locks of hair draping the sides of her face. The rest of the hair may be straight, curly, or anything in-between, but she must have two curls from either the hair directly in front of or directly behind the ear, and falling in front of her shoulders rather than behind, if it is long enough. If she has these, she either is high class or acts like it.

Needless to say, this is common among Ojou. Some Elegant Gothic Lolitas also sport this hairstyle.

Please do not list examples unless they have two curls from either the hair directly in front of or directly behind the ear and at least one of the lifestyle or personality characteristics (royalty, Ojou, Elegant Gothic Lolita, Lady of War, or other traits). Having two ringlets only does not qualify a hairstyle as Ojou Ringlets.