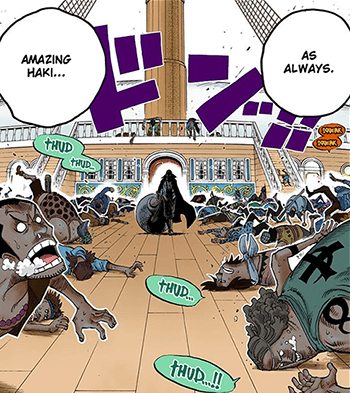 Nick: How can you make rainbows come out of zombies?
Juliet: From awesome!
— Lollipop Chainsaw
Advertisement:

Sometimes a character is so overflowing with the awesome that they don't actually have to do anything for it. They are not just awesome; they kind of have awesomeness as a power. All they have to do is walk into the room, or in in the most extreme cases, stand there. Their mere existence radiates an effect of awesomeness that causes tangible physical harm to their enemies and makes men and women fall in love with them. All anyone else can do is watch.

This trope (in case the multiple uses of the word "awesome" as if it has an objective meaning didn't tip you off) is by its very nature almost completely irrational and often used for comedy. Do not try to ruminate over the meaning of this trope. Either accept the physical manifestation of Rule of Cool or watch a more logical show.

Not to be confused with something awesome happening off-screen, where the awesomeness's effect was probably justified by something tangible actually happening.

A Sub-Trope of It Runs on Nonsensoleum, Rule of Cool. A Super-Trope to Awesomeness Is Volatile.