Characters / The Magic For Idiots

open/close all folders
The Shrine Residents 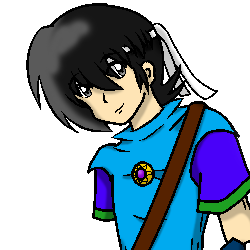 "I know I tend to be dense, even when something's obvious. I'm just a bit slow – Not insensitive."

Rokuro is an amateur wizard who crash-landed head-first into Akemi's yard one day in April. He seems to attract trouble wherever he goes, and seldom comes up with a way to get out of it by himself. He also seems to have a crush on Akemi despite the fact that she's taken. 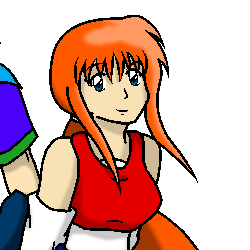 "Oh, come on; don't be like that. I'm trying to compliment you."

16-year-old shrine maiden who likes to think of herself as one of the sanest people she knows. While most of the time she's considered a tomboy, when she's with Daisuke, she goes into a surprisingly girly, dere-dere mode. She has little tolerance for stupidity, and likes things to go her way.

And yes, the orange hair is natural. 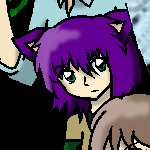 "You need to have a serious talk with yourself, Rokuro. Or at least with your common sense. I'm sure it misses you."

Maruchi is Rokuro's majikyou (Magic instructor) who made his first appearance in chapter seven as a purple kitten. He is barely half of Rokuro's height, and tends to be classified as either a huge jerk or a brat. However, despite his outward appearance, he is actually close to three hundred years old and has an IQ more than two times higher than Isaac Newton's. He's also known to be racist against humans, and sometimes even sexist, but not to any particularly serious degress. 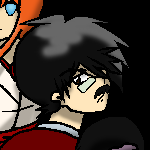 "Look, you pervert. It would do you some good to listen. This isn't your house. You can't just do whatever you want - And my daughter is at the top of that list!"

Shigeru is Akemi's Overprotective Dad and Meiko's more sensible younger brother by four years. He is noted to have no real, steady job, but is both an English tutor and the substitute coach for his old high school's kendo team. Sometimes he helps his sister with the drafts for her comic because she's usually too busy or lazy to do them herself. 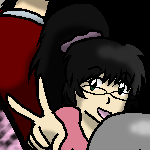 "I knew ghosts and spirits were real! My fantasies aren't fantasies after all!"

Rie is Akemi's classmate and foil best friend. She's very much into the occult and the idea of magic, and acts very enthusiastic about it. Rie is also a proud Otaku, and a fangirl of Izumi Rio. She is great at school, especially English, despite the fact that all she does during class it read (Whether it be manga or an occult book). She's also Daisuke's younger sister by a year. 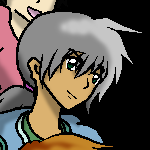 "Just who the hell do you think you are, touching my girlfriend like that!?"

Daisuke is Rie's older brother, Akemi's boyfriend, and a second year student at Okashii High. By his profile, he's shown to be a B+ student and a member of the kendo team. He's a truly nice guy with good morals, and is absolutely the sanest person in the cast, but will fly off the handle if you do anything to upset or hurt Akemi. Your ass is grass, then. Like Rokuro, Daisuke is afraid of Shigeru. 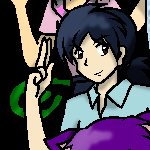 "Give my best regards and apology to your father, will you? Oh, and tell Rokuro and Maruchi that they did a good job as well."

Hizen is Akemi's slightly creepy substitute homeroom teacher. He was Shigeru's classmate back when they attended high school, and still holds some amount of enmity towards him. He became a permanent part of the cast upon learning about his rival's houseguests. 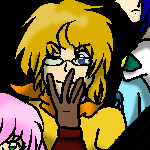 Hideki is the only other wizard known at the moment. He is Rokuro's best friend, and extremely confident when it comes to getting girls. Even though he's never succeeded once. He just comes off as a pervert. He's also been known to screw up and slack off, and even has a schedule made for skipping classes. Despite these qualities, Hideki is shown to be very concerned with the wellfare of his friends, and is helping Rokuro keep the fact that he's now on Earth for a year secret.

Shichi is another resident of Kitakuvaaraji. He first appears as an evil spirit, scaring Rie from her home so he could live there while training to become a majikyou, but is later caught and revealed to be a very talkative boy with the power to control shadows. Shichi is also revealed to be Maruchi's second and youngest brother, and admires him very much. He's two hundred and ten years old and colorblind (Which partly explains his horrible taste in fashion). 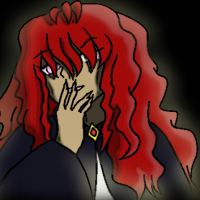 "I suppose some things just don't change in some centuries and a half… Though I shouldn't be surprised. Both your heart and blood were always cold."

Another resident of Kitakuvaaraji and Shichi's mentor. She runs an occult shop in the heart of the city, where she first came across Rokuro, Akemi, and Rie. Sandra despises Maruchi due to their past history, but is civil enough to speak with him evenly without losing her cool often. 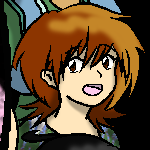 Meiko was the first other Segawa family member to get a formal introduction in Mabaka!. She is the eccentric older sister of Shigeru, and Akemi's only aunt. She's an extremely happy person, and makes her feelings and thoughts known loudly and bluntly. She loves her little brother very much, and is insulted by the fact that he refuses to work with her on her manga, Yamato Master.

She is married to Tsukkomi, and has a daughter, Emiri. 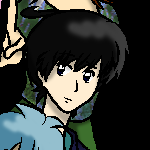 "Very sorry to disturb you, Shigeru-san... We'll just be on our way now."

The most worrisome character of the story. He's a company worker who married into the Segawa family by marrying Meiko. He's a rather nervous man, and he's known to apologize a lot - Mainly to Shigeru. When altercations break out between the two siblings, Tsukkomi is the one who tries to remain neutral and calm them down. He's also the tallest character in the series.

He has a single daughter named Emiri. 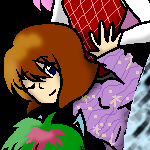 "Why do I have to be around the crazies my entire life?"

Emiri is Akemi's eleven-year-old cousin. She's the daughter of Tsukkomi and Meiko, and seems to be more like her father than her mother. She has more common sense than most of her family does, as it's noted by Akemi. She may or may not be classified as a know-it-all, depending on who you ask. Apparently, she wants to go into the medical field when she's older. She also tends to invariably tick Rokuro off whenever they speak. 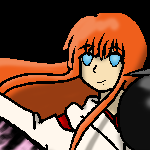 Akemi's mother and Shigeru's dead wife. Not much is known about her, other than that she was very beautiful and "went away" at a young age.

The major part of Rokuro's magic is him utilizing different elements and weapons. Unfortunately, his uniform isn't the only thing that changes when he activates them...

Tropes that apply to all of the charms (So far):

The fire element, giving Rokuro a boost to his speed, strength, confidence, and arrogance.

The wind element, encompassing Rokuro's common sense (Yes, he has some) and work-a-holic side of himself.