The cast of the Malus Darkblade series, and the tropes that apply to them. 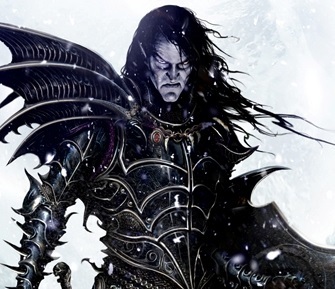 "Through hate, all things are possible...And my hate is strong."

Bastard son of Lurhan, Vaulkhar of Hag Graef, and the sorceress Eldire, Malus Darkblade is considered the lowest of his highborn family. Driven by a ruthless ambition to surpass his kin, Malus embarks upon a quest deep into the Chaos Wastes in search of an ancient power - only for said power to actually be the vile daemon T'zarkan, who possesses the dark elf and delivers an ultimatum: Recover five artifacts to release the daemon from its prison, or forfeit his soul forever.

An ancient daemon sealed inside a Crystal Prison, T'zarkan possesses an unwary Malus Darkblade and forces the highborn to search for the keys needed to release it, lest T'zarkan devour his soul.

A powerful Sorceress and Malus' mother, she is the sister of a rebellious Dark Elf commander. After her brother's defeat Eldire went to Lurhan after the death of his first wife , secretly at Eldire's hands, and made a deal, including having child with him for her own purposes.

Malus' first half-brother and oldest sibling, and renowned captain of a raiding fleet.

The third of Lurhan's children and Malus' half-sister. Renowned as probably the most beautiful woman in Hag Graef

The fourth oldest child of Lurhan and Malus' other half-sister.

The fifth child of Lurhan and Malus' third half-brother. Born crippled because Eldire slowly poisoned Lurhan's first wife, he was given to the Temple of Khaine as a sacrifice. When the cauldron of boiling blood he was thrown into split open and he survived it was taken as a sign and he was raised as a disciple of Khaine.

Eldire's brother and Malus' uncle, leader of the Black Ark Naggor he rejected the Witch-King's rule.

A female corsair who served as the first mate on the raiding ship Manticore, upon which Malus embarked on his first raiding cruise. She later joins his warband and becomes one of his chief lieutenants. Until her death at the end of The Daemon's Curse.

A roguish guardsman from the city of Hag Graef who later joins Malus' warband.

The Witch King of Naggaroth and ruler of the Druchii.