Literature / The Star Pixie and the Serpent Queen 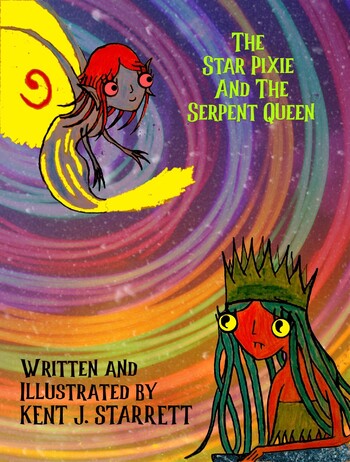 "Everyone's hideous, not just you and me
They're ugly in ways they pretend not to see!"
— The Serpent Queen
Advertisement:

The Star Pixie and the Serpent Queen is a children's book written and illustrated by Kent J. Starrett, released on April 25th, 2018. It is a mostly known for its illustrations that walk a thin line between creepy and cutesty and being a touching story about self-acceptance and using creative expression to deal with traumatic life experiences. Though marketed as being for children, its appeal sweeps across the age spectrum widely.

The book's summary reads as such:

"The Star Pixie is a being of pure light and joy; casting her whimsical rays all night and all day on the faraway world of Clarionix. But when a stray comet knocks her right out of the sky, her wonder and beauty are gone for good. Sad and alone, she wanders the surface of her world.....until she meets the Serpent Queen, a creepy, crawly creature with crown, a staff - and an important lesson about facing your hurt head-on, and harnessing it for something beautiful."

The Star Pixie and the Serpent Queen provides examples of: