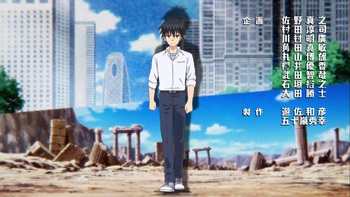 The protagonist, and the character whose POV is most prevalent. 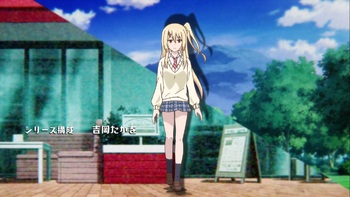 Just shut up and listen to the GM. He's not going to respond to you.
Voiced by: Risa Kubota (Japanese), Jeannie Tirado (English)

The School Idol and the first of the students to be whisked away to the game-like world. 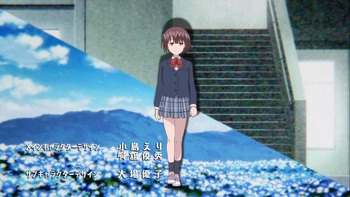 I just want to stop being a burden.
Voiced by: Azumi Waki (Japanese), Valeria Rodriguez (English)

The "warrior" of the party. 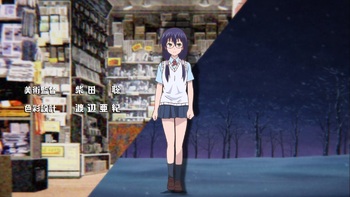 A glasses wearing girl who is a huge anime fan and loves to do a public live-stream show. She is introduced being pinned down by three bully girls in the girls' bathroom, being stripped and filmed. Yotsuya rescues her at the behest of the GM.

A blonde drop-out in his late-teens with a penchant for street fights. Keita is introduced being set up to take the fall for killing a guy for the yakuza. Under the guidance of the GM, Yotsuya thwarts the murder attempt and saves Keita and his family from the clutches of the yakuza.

An English-speaking young woman who travels and creates short films. Glenda is introduced by being prompted by the GM to meet Yotsuya and to "judge" him - as she filmed him. It is revealed that Glenda is an open lesbian, which has caused issues with her family.

A glasses-wearing otaku and a programmer that used to work for a black company. The current oldest member of the group, Futashige was introduced when Yotsuya saved him from committing suicide. 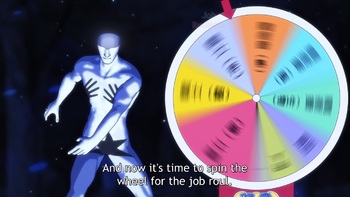 Hello, [Player Name] (hand on shoulder from behind). I will now explain the rules to.
The entity that summons the cast to an alternate game-like world, gives out jobs by roulette, and quests.
Kahvel
Voiced by: Chiwa Saitō (Japanese), Cristina Valenzuela (English) 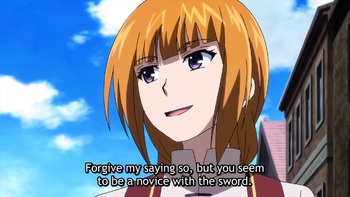 There's nothing I like more than cutting living flesh!
A knight Yotsuya meets at a martial arts tournament he participates in so as to acquire horses to complete the GM's quest. She beats him in a matter of seconds.
Advertisement: 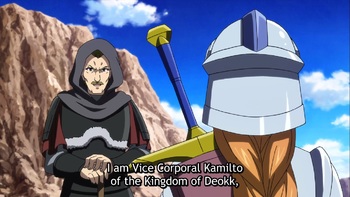 I can't understand a word you're saying, but I know you're insulting my king!

The leader of a squad transporting a group of death-row condemned "criminal heretics" from the faith of Asteros. He and his group take an immediate dislike to Yotsuya's party despite being rescued in episode 5.

Orc Queen
The primary antagonist on Jiffon Island, or so it seems.
Dragon Disciples As a Whole
A cult seeking to revive the world ending dragons that would kill every last human in the multiverse they can get to.