The cast of Coμ - Black Dragon in a Gentle Kingdom. 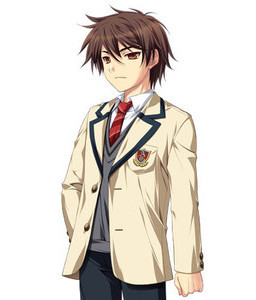 The protagonist of the story. Akihito is rather distant with people, but he has a weakness for women and will always go out of his way to help them as a self proclaimed feminist. However, he avoids getting too involved with their business as well. His distance from other people is related to the murder of his mother, which apart from distancing him from others has made him rather accepting of revenge. 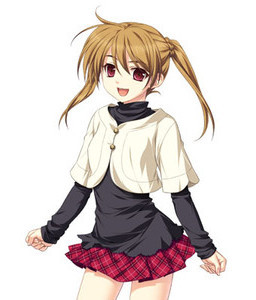 A girl in the same year as Akihito who attends a different school. She meets Akihito when the coμ forms and quickly develops a crush on him and quickly begins to lament her small cup size, which leaves her feeling inferior to Kagome and Haru. She's the most moral member of the group and wants to actively use Babylon to pursue justice and fight evil. 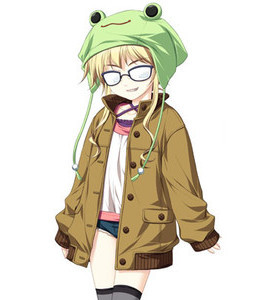 A young otaku girl. She always wears a large frog hat and thick glasses that hide her features, but she actually has good enough looks to work as an Idol Singer, though she doesn't like standing out. She's a habitual liar and is rather distant from most concerns of the real world. 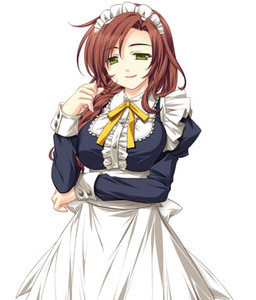 The most mysterious member of the coμ. She works at a maid cafe somewhere and is an open hedonist with almost no concern for what the group does, preferring simply to follow the majority so as to maximize her changes of survival. Her personality is hard to read. 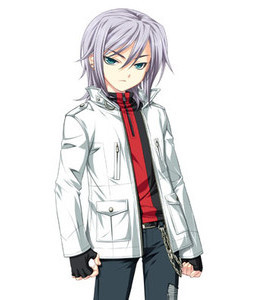 An up and coming thug in the New Heart area of town. He's violent and no stranger to murder, but actually does have his own set of morals and does his best to support his little sister and their brothers.

The black dragon itself. It has fourteen glowing red eyes, ten points and mastery over gravity. 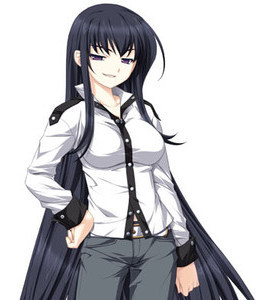 An unofficial bonus member to the coμ. She is not linked to Babylon, but she followed Akihito when he was called by Girl A and was there when it was summoned. Though not a member of the group, she often pretends that she is so as to mislead potential enemies. She has almost superhuman abilities and is referred to as a black witch by most both because of her nonsensical physical and mental abilities and because she's even crazier than Izawa. 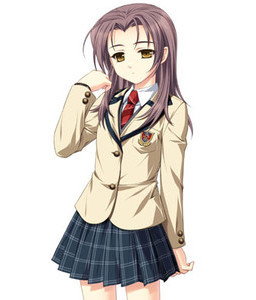 A mysterious transfer student who only appears after clearing the Benio route. She's almost emotionless and looks fairly plain, but Akihito feels an odd connection with her. She has scars from attempted suicide on her wrists. 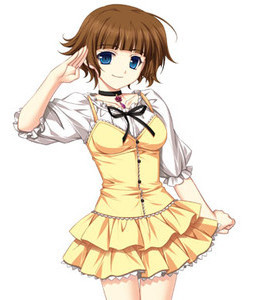 Akihito's underclassman. She likes to run around him flirting and jumping wildly to conclusions. She's unconnected to all the issues with connectors.

The school nurse and an unregisted back alley doctor, sort of. Her name sounds very fake, for which she curses her parents. Whenever Akihito needs help but can't go to a hospital for whatever reason he tends to ask for her assistance. She also provides Kagome with her special diet pills. 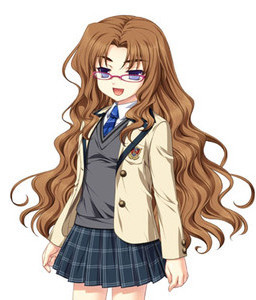 Akihito's bizarre upperclassmen. She has good looks, but thanks to her bizarre personality she has few admirers. She fancies herself a super detective, but surprisingly enough she lives up to that claim. She's something of a wild card given that while she doesn't know about connectors and avatars she knows just about everything else that's going on. 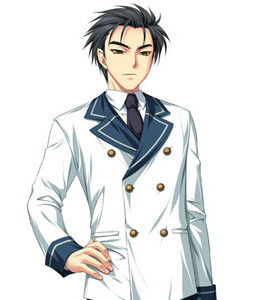 The self proclaimed king-to-be of the coμnet. He controls the invincible El-Ahrairah, a massive white knight with nine blades. He is the only one with the will and power to hold the coμnet together, but his occasionally shady actions put him slightly at odds with Akihito, though the two otherwise consider each other Worthy Opponents. He is also the guardian of Yoruko. 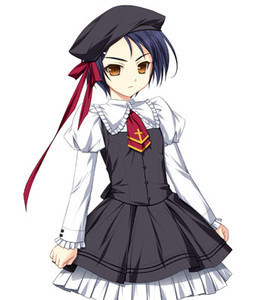 A young but overly serious little girl who uses the 9R, the nine blades that float around El-Ahrairah. She considers herself Gasai's knight because she wants to be of use to him. She's otherwise prickly and unsociable. 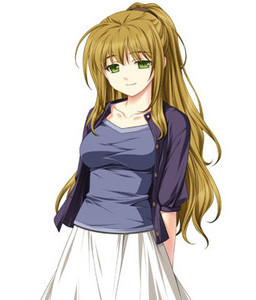 The pacifist leader of the Round Table. While she has been able to hold the coμnet for the past two years, her methods are no longer able to keep things under control and her power base is slowly dissolving as her ineffective leadership becomes more obvious. She often asks Akihito for assistance. Her title in the Round Table is Sir Percival, which she finds extremely embarrassing.

An ally of Nanase and a member of her coμ. He's much less moral than she is, but also loves her greatly and wants to support her.

Sir Lancelot of the Round Table. After Nanase, he's the most important member of the Round Table's executives, but is far more militant and power hungry. He initially hoped to use Babylon as a tool to increase his prestige and the influence of the Round Table, but after the defeat of Jack the Ripper the exact opposite occurred. 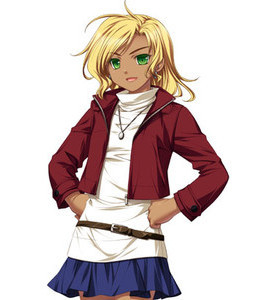 A darkish skinned girl with blond hair and green eyes. She has a proud attitude and a powerful Burroughs type avatar named Miss JH. She's seeking revenge against Caesar, but doesn't know his true identity.

The leader of Jack the Ripper's coμ. He seized power by openly murdering the first leader with a knife and then killed a second member when he objected. He has gone completely crazy and after seeing Sting tries to bait it into the open again by picking fights with Babylon's coμ and attacking civilians. In the past, he was the big sister figure for the girlfriend of one of Akihito's classmates.

The man running the battle gigs and the leader of the Nomad coμ. Every time he fights, he destroys the enemy avatar and kills all five connectors.

Paranoid connectors with a massive avatar that looks like an evil castle.

Macbeth is a Georgios avatar like Babylon. It has control over magnetism, which is a great asset when fighting the metallic avatars.

The mysterious singing girl who joins together five connectors into a coμ. Lacking direction, many connectors view her as some sort of mystical savior or godlike figure, though nobody worships her.

Akihito's boss at Izalone. A very shady man that Akihito suspects is linked to organized crime, but he pays well, has good connections and is otherwise friendly and supportive.

Benio's father. Her mother divorced him some time ago after he spent too much time focusing on his job rather than his family, after which he made a bad mistake out of stress, which put an end to his career advancement.

A mysterious woman that Akihito considers a death god. She calls herself a magician and can effortlessly destroy avatars with her bare hands. She reminds Akihito of the killer that once gave him a knife, but he's not sure whether they're the same person or not.

A narcissistic scientist. He's Ayaya's uncle, so perhaps it's not unusual that he rarely seems to actually listen to what anyone is saying.

A mysterious flying blade assumed to be an avatar. It's considered invincible and, if is an avatar, it's agreed to be the most powerful.

The project leader for the Acceptor stories. His updates are sporadic and he's otherwise quite quiet, but even so it's been a long time since anyone has heard from him. While Amakuni contributes the most amount of sheer textnote though a large chunk of it was irrelevant details nobody would care about and Yuki provides a lot of the plot details, he's responsible for the basics of the story, compiling all the work and some of the neater ideas.