This is a list of characters who appear in the Soul Eater fanfic Black And Gold. Because this is a fanfic, only OC's will have representation here.There will be untagged spoilers, read at your own risk.

"The next five minutes of my talking is basically just me saying, 'Fuck you, I win.'" 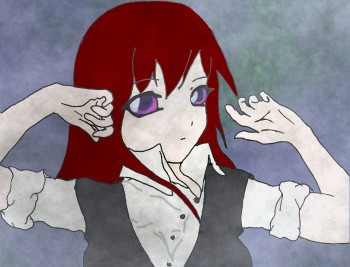 The main character and narrator of the story. L.J. is rather blunt, cynical, and sometimes tactless. Her most prominent trait is one of her bigger flaws- she covers up her insecurity with sarcasm, and is almost a compulsive snarker. L.J.'s not quick to trust, but when she does, she'll stick by her friends no matter what. Unfortunately, she's had a bit of a rough past, and is eventually revealed as a fairly unstable girl with a load of psychological ticks (the most minor being an inferiority complex) and a pretty dark secret.

"No, you just live in a giant red castle with huge candles, spikes, and massive skull on the front. What could possibly go wrong!?"

A very chipper and peppy girl with dissociative identity disorder and type 2 schizophrenia. And she can turn into a missile launcher. L.J. found her in a wrecked town, and since then Kira's become her sidekick and substitute partner. Eventually, her own dark secret comes to light.

"Some dumbass just crashed his crappy car into our wall! Let's go teach 'em a lesson!"

L.J.'s bodyguard and partner, he can transform into a trident sword. Rather laid-back, lazy, and with a slightly sadistic sense of humor, he and John (surprise suprise) have their own dark secret.

Damian: Oh come on! It's not like I can't tell you're all waiting for me to stab a kitten, just because my mom had a hard pregnancy and wanted to get back at me!

"'Not that big a deal!?' Countries have declared war over less insanity than this!"

L.J's other partner/bodyguard, John also turns into a trident sword. Damian's childhood friend, though he is considerably more sane.

The Godlings from the Institute

A Five-Man Band of future PhysicalGods originating from the UK. They're each psychologically eccentric in their own way, and their introduction sets the tone for the story as a (potential) AU. In Black and Gold's universe, there are various Anthropomorphic Personification beings that represent various "Forces". Fragments/Godlings are used as an insurance policy for the Balance, should the original God die.

The Hero: L.J.
The Lancer: Adam (though he and L.J. aren't rivals)
The Big Guy: Mary
The Smart Guy/ The Heart: Isaac
The Chick: Leah (originally her role was reversed with Mary, before she became more badass)

"What you yanks did to the English language, I'm about to do to your face!"'

L.J's childhood friend and the Son of the Wind Spirit/God. He's a bit of a flirt and an Idiot Hero, but he's also very protective of his friends.

"If I see something I haven't seen before, I'll throw a dollar at it."

Another of L.J.'s friends from back home, and the Daughter of the Fire Spirit/God. Very sassy and blunt, she's considers herself more mature than her boyfriend. Unfortunately this is debatable, given that she's a Heroic Comedic Sociopath and all...

"He can sense souls, you prat. Break into his house and he'll know!"

Part of the Five-Man Band, and Son of Earth. The most reasonable and patient of the group, he befriends Kira.

"With all due respect sir, you don't scare me. I once killed a man with a hat stand, and he was way taller than you!"

Member of the Godling Five-Man Band and Daughter of the Water Spirit/God. She seems sweet and unassuming, but she's unbelievably badass, not to mention scary if she wants to be. Loyal to her friends, but rather mischievous as well. Not very good with commitment, apparently.

The Sons of Love-Mike, Peter, and Joey

L.J.'s cousins, and the sons of Love. They're the oldest of the demigods, and well known for knowing everything. No, seriously. Everything.