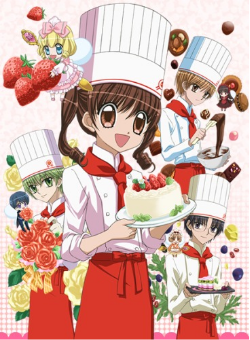 "Won't you have some of my dream-colored sweets?"
—Ichigo's On The Next Episode Of Catchphrase
Advertisement:

Yumeiro Pâtissière (Dream-Colored Pâtissière) is a shoujo manga by Natsumi Matsumoto which was serialized in Ribon magazine from 2008 to 2011. An anime adaptation aired from 2009 to 2010.

Clumsy junior-high student Amano Ichigo has never been good at anything. Her younger sister Natsume has all the talent in the family. But Ichigo loves cakes, or eating them, at least. Sweets can make people smile, even when they're feeling sad; her late grandmother, a pâtissière (French for "female pastry chef"), could always cheer her up with her "magic" cakes. One day, during a pastry convention, Ichigo meets Henri Lucas, a pâtissier from the French baking school St. Marie Academy. He lets her try his newest cake, and she's able to describe the feelings that inspired it after one bite! What amazing taste she has!

That's it—Ichigo decides she wants to be a pâtissière and make sweets that spread happiness. Henri helps her enroll at St. Marie (which conveniently has a Japanese division), and thus begins her journey down her grandmother's path! But Ichigo's clumsiness catches up to her, and baking proves harder than she imagined. To make things worse, she's placed in the same team as the Sweets Princes, St. Marie's three master pâtissiers! Thankfully, more help comes to her in a tiny form: a "Sweets Spirit" named Vanilla, who's also trying to become a pâtissière in her world.

Season two, Yumeiro Pâtissière SP Professional, jumps a couple years ahead of the manga's story. Now in high school, Ichigo and the Princes become involved in a special project led by Henri. Each student must maintain a real pastry shop, including creating the menu and keeping the business in the black. This time, Ichigo must prove she can turn her love for sweets into a career. (Of course, there's also plenty of high school romance drama mixed in as well.)