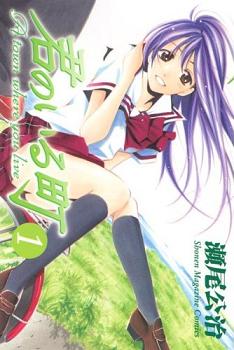 Kimi no Iru Machi (translated: A Town Where You Live) is a manga by Seo Kouji, notable for his other series Suzuka. Haruto Kirishima is a typical highschooler living in the countryside: worrying about school and his Unrequited Love, Nanami Kanzaki. Everything's been normal until one day a stranger by the name of Yuzuki Eba announces that she's come from Tokyo to the countryside (Hiroshima) to attend High School. What's more, she's going to be living at his house, which of course worries Haruto about how that will look on him. Life just got interesting when this stranger came to town.

The series is a blend of romantic drama and romantic comedy, said to be a "character-driven romance", and set in Seo Kouji's hometown. Over the course of its run, it seems to have gradually shifted towards more of a Harem Comedy/drama based around Sitcom-ish misunderstandings and hijinks. The series began in May 2008 and ended in February 2014. A two-episode OVA series was released in 2012, followed by a TV anime series (with two OVA) in Summer 2013 Anime season.