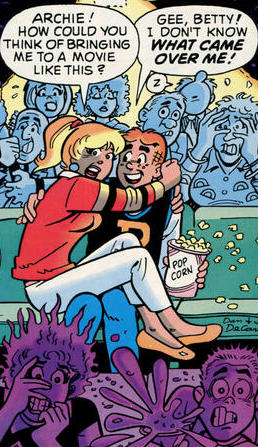 Boyfriend and girlfriend are in the cinema, watching a highly gory movie, which we don't see. The girlfriend is really scared, hiding behind the popcorn and holding her boyfriend for comfort. He thinks he's in with a chance.

Sometimes overlaps with the old "yawn and put your arm around her" trick.

This is often inverted for humorous purposes; the guy might think the girl will be scared, but he's the one who freaks out. There's also the possibility that she's putting on an act just to get closer to the guy. (Similarly, when it's played straight, the guy might deliberately take his squeamish girlfriend to a scary movie so she'll freak out and want him to hold her.) But for maximum heartwarming points, combine the two; the girl can tell that her boyfriend is terrified but too macho to admit it, and plays the Damsel in Distress to make him feel better.

This trope isn't usually true in real life, but is sometimes played with strangely. Given that, according to a well-known psychological study, fear triggers romantic attraction (presumably when the fear is caused by something present in the environment and not the second person's actions, although some tropes might say otherwise), attending a horror movie might be a particularly good decision for a first date. Also, a second study