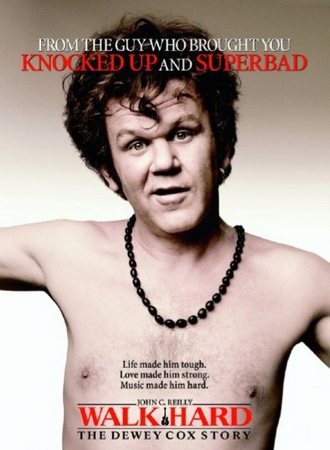 Walk Hard: The Dewey Cox Story is a 2007 Judd Apatow-produced movie that parodies musical biopics like Walk the Line and Ray.

Walk Hard tells the tale of Dewey Cox, a musical prodigy whose musical career spanned the 50's to the 70's. Along the way Dewey takes lots of drugs, bangs lots of groupies and eventually learns that the path to happiness lies in spending time with his dozens of illegitimate children.

Walk Hard stars John C. Reilly, who spent a year recording 40-plus of the songs that his character supposedly wrote. He proves himself to be a more than capable singer and, much like the cast of The Naked Gun, he approaches the ludicrous situations with the same sincerity he uses in his more serious dramatic turns (The Aviator, Magnolia, Gangs of New York, We Need to Talk About Kevin).