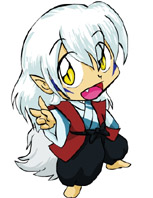 "[Anyway], aside from my shortcoming of not being so amazing that I was lucid fresh from the womb, I can relate the circumstances of my birth and early childhood." -Chapter 1
Nicknames Given: "Kid" (by Yachouon), "Bake-inu" (by Akagane), "Wan-chan" (by Hisui), "Puppy Boy" (by Eika), "Woof" (by his mother)
Advertisement:

The unnamed protagonist and narrator of the story, who eventually grows up to become Inuyasha and Sesshoumaru's father. He was raised as an ordinary dog in a human village until one day the village was attacked and destroyed, and his mother mysteriously disappeared. On his own for the first time, he sets out to discover what happened to his mother and village. 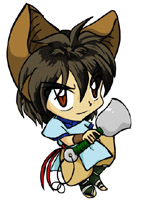 Yachouon: "Well, you're definitely a pathetic sight now, kid. I dunno what you were thinking trying to take on that oni by yourself, but thanks for distracting him for me for a bit. Too bad you're so small and wimpy, though, else I could've used you." -Chapter 4
Name (kanji): 夜潮音
Name meaning: "Sound of waves at night"

A sound-based youkai who takes the appearance of a 12 year old child with bat ears. He carries two bells, Kakyou and Genkyou, which can amplify and suppress a target's power, respectively. Genkyou has been stolen, and he enlists in Inu-papa's canine tracking skills in order to get it back. 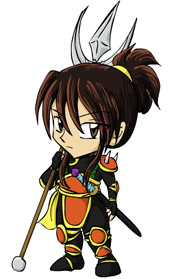 Akagane: " "You are more than welcome to roll over and die if the idea of inconveniencing anyone else is so distasteful to you. The reality of the world, however, is that every action you take affects someone negatively somewhere, even if you did not intend it, and even if you are not aware of it." -Chapter 21
Name (kanji): 赤金
Name meaning: "Copper"

A skilled blacksmith who abandoned his trade after his sister's soul was stolen by the mysterious "One-Eyed Youkai". He begins working as a taijiya, contracting his services to slay youkai in the hopes of finding and defeating the One-Eyed Youkai that killed his sister. Inu-papa ends up on his hit-list, and must convince Akagane that he is not a threat.

Hisui: "Yes, that's exactly it! Tragedies aren't the end of the world, and you need to be able to learn from them and see that there can still be a future." -Chapter 60
Name (kanji): 翡翠
Name meaning: "Jade"

The daughter of the chief of the Artisan Village where Akagane lives. She crafts women's hairpins to sell in the city, and has a passion for accounting and record-keeping. She supports Akagane's quest to find his sister's killer, at odds with the rest of the village who demand he return to proper work. She is the first person to treat Inu-papa kindly after the loss of his mother, so he becomes instantly attached to her.

Ryakki: "In the future, the legend all the children will want to hear will be the one about the great female oni thief Ryakki!" -Chapter 45
Name (kanji): 略鬼
Name meaning: "Thieving oni"

A little oni girl trapped in the cursed forest at the base of the cursed mountain. She is a kleptomaniac and makes a hobby of ransacking the corpses that are regularly thrown from the mountain. She desires to someday be taken seriously despite her gender and speech impediment. Ryakki first meets Inu-papa when he approaches the cursed mountain in search of his mother, and she agrees to guide him in return for his "treasure".

"I was... alone. Eika, while annoying and extremely superficial, was at least company. But in my moment of emotional need she had... left. She couldn't handle it, so just left." -Chapter 31
Name (kanji): 詠歌
Name meaning: "Poem"

A sound-based youkai who can manipulate people like puppets with her musical instrument. She is constantly seeking the perfect man with the perfect aura, and chases any man she sees to varying degrees of success. She had a past relationship with Yachouon that didn't work out, so decides that Inu-papa is going to be her perfect man once he grows up. 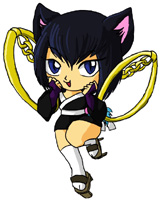 "You make it sound like it's no big deal. My family's very purpose is to guard this forest. They would die to protect them, and they did, and so will I." -Chapter 95
Name (kanji): 輪影
Name meaning: "Ring Shadow"

A shapeshifting kitsune who is the last surviving guardian of the forest. She sought revenge against humans for the deaths of her family and her forest, until she discovered that the one who betrayed her wasn't who she thought. Now, abandoning her duties, she seeks out her sister's true killer. Deception is the only means by which she knows how to interact with people, and her hatred of humanity runs deep.