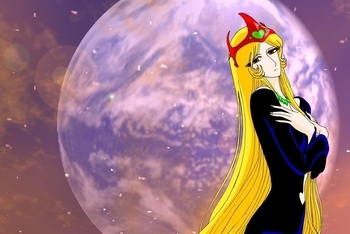 Queen Millennia (Japanese: Shin Taketori Monogatari: Sen-nen Jôo - The New Tale of the Bamboo Cutter: The Queen of a Thousand Years) is a science fiction anime by Leiji Matsumoto set in the Leijiverse. It is (very roughly) based on a Japanese folktale called The Tale of the Bamboo Cutter which tells of a girl coming down from the stars to rule Earth for 1000 years.

The young Hajime Amamori makes friends with a new girl at school (and assistant to his uncle, an astronomer), Yayoi Yukino. It later turns out that she is in fact an alien sent to Earth to supervise the undercover preparations for the day that the solar system's tenth planet, Lar Metal, will collide with Earth and wipe out all life on September 9, 1999, at 9:09:09. After a while, she starts plotting against her destined fate and tries to find a way to save humanity from destruction against the will of her mother, the queen of Lar Metal.

The series was popular in Europe and Latin America in the end of the '80s/beginning of the '90s, but has never been published on video/DVD. In the US, the series was cut together with Captain Harlock by Carl Macek/Harmony Gold and published under the name Captain Harlock and the Queen of a Thousand Years. There is also a full-length movie which changes the original story somewhat.