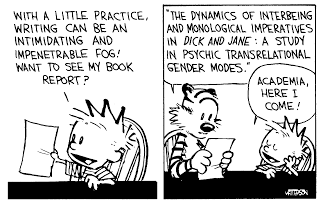 "Maybe we can eventually make language a complete impediment to understanding."

Kids that speak by throwing around big words that you'd usually find in scientific journals or old English texts. This is either an indicator of the kid being a Child Prodigy or trying to simply sound like one. Often combined with Sesquipedalian Loquaciousness or Expospeak Gag.

This might be because the character is Wise Beyond Their Years or acts their intellectual age. See also From the Mouths of Babes and Most Writers Are Adults. Contrast Totally Radical. The Brainy Baby and Teen Genius are likely to talk this way. Subtrope of TV Genius. In a work where the writer has no understanding of children whatsoever, this can coexist with its opposite, Kiddie Kid.

Can be Truth in Television to an extent; kids can quickly pick up quite complex phrases and even the appropriate time to use them, without necessarily being sure what they mean.