Literature / A Spy in the Neighborhood 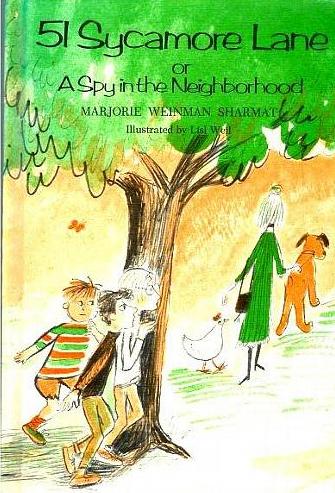 Paul: Never forget, that espionage flourishes while the world snores.

A Spy in the Neighbourhood (also published as 51 Sycamore Lane) tells the story of three boys who believe that a woman in their neighborhood may in fact be a spy for a foreign government. So they decide to do some spying themselves to try to get proof.

The kids themselves are:

Making things a bit complicated for the kids is the spy's pet chicken, who is considered a nuisance by her neighbor, who in turn is trying to get the chicken removed from the neighborhood via petition. If enough attention is brought to that issue, then the kids' plans will go up in smoke as they won't be able to spy on their suspected spy anymore. So they try to thwart her by taking the train to the big city and hiring a lawyer to try to get the petition shut down, which doesn't work out.

Having failed at that, the kids just decide to go ahead and spy on her anyway, showing up early in the morning to observe her and try to get as much information and proof as they can. Even with the help of the smart-for-his-age Paul, their efforts are still amateurish.

A light-hearted, mildly comedic suburban adventure by the author of Nate the Great.

Alternative Title(s): Spy In The Neighborhood