After the End
aka: Postapocalyptic 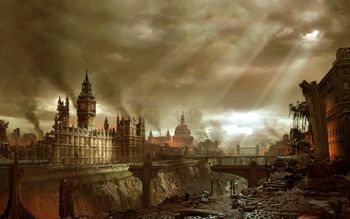 The book of humanity closes and the words "The End" are given upon us all, yet the story continues in a new location: Hell on Earth.
"...it was not, as some had predicted, the end of the world. Instead, the apocalypse was simply the prologue to another bloody chapter in human history."
— Fallout 3 intro monologue

Something hugely nasty has happened to humanity. Be it nuclear war (which was once very popular but has gone out of vogue, in part due to The Great Politics Mess-Up), The Plague (which currently seems to be the most popular), natural disaster (which seems the most likely to happen in the near future in Real Life), supernatural disaster (usually the case with a Sealed Evil in a Can or missing Cosmic Keystone), devastating environmental changes (which, in this kind of fiction, happen too quickly for civilisation to adapt), a Zombie Apocalypse (also hugely popular these days), or an Alien Invasion (God help us if that one happens) - most of humanity is gone.

The result is generally that you have the remnants of humanity fighting to survive in a hellish and devastated Crapsack World full of Scenery Gorn, Ghost Cities and a lot of nastiness in every corner of whatever remained of past civilization. This environment is perhaps also a Scavenger World which may have pieces of Schizo Tech and Lost Technology (or even Weird Science) here and there, but also where people inevitably degrade down to Disaster Scavengers and Crazy Survivalists, for whom staying alive may well mean being Reduced to Ratburgers or worse, especially if they're Too Desperate to Be Picky. If enough time has passed, those born after the end may hear stories of The Beforetimes from those few who survived the catastrophe, trying to impress upon the children what humanity was and still is capable of. Expect a Fish out of Temporal Water who Slept Through the Apocalypse to wake up to see their world changed. At any point in the setting an Apocalyptic Log may be found to explain exactly why the world was devastated in the first place, and/or an Archaeological Arms Race might break out to reclaim the old world's technology.

Large civilizations that were able to recover or at least preserved can include a Divided States of America and multiple interwarring states fighting each other for the corpses of a former superpower, a Dystopia struggling to survive, or a Days of Future Past with a Future Imperfect attempt to recreate happier times.

In any post-apocalyptic story created after the release of Mad Max, it is almost assured that the obvious and natural way for the world to look after a civilisation-destroying cataclysm is "the Australian Outback". There is no need to explain this. Global catastrophe turns the world into a gangster-infested anarchist Wretched Hive Australia. It just follows logically. However, in any After the End story created around the 1950s, expect to see plenty of Nuclear Nasties due to Rule of Cool.

Related, if not quite the same, is the period immediately after the fall of Rome; most Film and TV set in this time tend to depict it as a time of post-apocalyptic anarchist savagery populated by interwarring warlords; medieval Europeans also tended to perceive themselves as a diminished people living among the ruins of a greater, fallen world. Thus, After the End stories will reference historical parallels about humanity's decay into Medieval Morons wallowing in filth and superstition, fighting for survival, and exterminating any "mutants" with fire. In fact, while there was a significant increase in banditry and piracy, most areas were peaceful most of the time. Fantasy series (especially JRPGs) are chock full of ancient, highly advanced civilizations that met their end and pitted humanity into a long Dark Age in a similar manner.

If you're really lucky, you may get a Cosy Catastrophe, in which case it's best to be friendly and humane, but also adaptable and brave. Of course, that's not a bad personality in Real Life. If you're really unlucky, the only ones left to mourn at Humanity's Wake will be robots, mutants and aliens. Or dogs — you just better hope you brought yours along for the ride, and it stays faithful...

While this is a legitimate trope, like Luke, I Am Your Father, it's also a very popular fan theory for shows that don't seem to take place in our world.

Compare Just Before the End, End of an Age, And Man Grew Proud. Not to be confused with The Stinger, an after the end credits scene. See also Soiled City on a Hill and Depopulation Bomb. The people who lived before the end will often come to be seen as Precursors of some stripe or another.