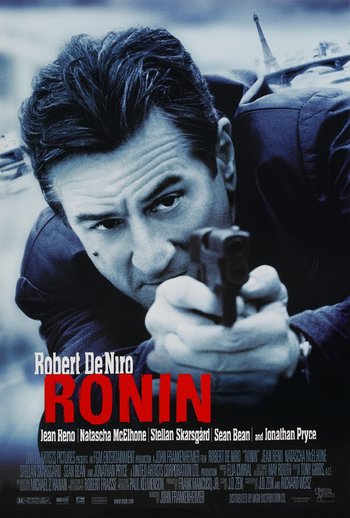 Jean-Pierre: The warrior code, the delight in the battle, you understand that, yes? But also something more. You understand there is something outside yourself that has to be served. And when that need is gone—when belief has died—what are you? A man without a master?
Sam: Right now, I'm a man without a paycheck.
Advertisement:

In the aftermath of the Cold War, many secret agents felt unnecessary or redundant. Even if the world wasn't all sunshine and rainbows, the way they worked just didn't seem to apply anymore. This 1998 film deals with some of these people, who are compared to Rōnin, the unemployed Samurai of old Japan.

The plot centers around some mercenaries hired to steal a metal suitcase, and the deals and double crosses to get whatever is inside it. Apparently it is valuable enough to cause lots of shootouts and car chases.

Directed by John Frankenheimer, the film has Robert De Niro heading a cast of notable character actors, such as Jean Reno, Sean Bean, Natascha McElhone, Jonathan Pryce, Stellan Skarsgård, and Michael Lonsdale. The finished film was partially or completely written by David Mamet depending on who you ask (original and credited screenwriter J.D. Zeik and others close to the production say Mamet only did some fleshing out of DeNiro's character, while Frankenheimer says the script is all Mamet).