Characters and the specific tropes appearing in the manga.

BEWARE SPOILERS FROM THE MANGA ARE UNMARKED

A boy with a very straightforward and at times blunt personality. He doesn't believe in lying to himself or others, and so will usually say exactly what's on his mind no matter the circumstance. After spending his middle school years asking Saki over and over...and over again to go out with him, she finally says "yes," at the start of their first year in high school.
Advertisement:
Saki Saki

Naoya's childhood friend and girlfriend at the start of the series. A cheerful girl with a lot of energy. Saki tends not to sweat the small stuff, and whether its a good thing or not, she tends to go with the flow.
Nagisa Minase

Naoya and Saki's classmate who confesses to Naoya on her introduction. She is a nice somewhat meek girl who was inspired by Naoya's dedication to Saki to try and better herself.
Shino Kiryū

Saki's best friend. Shino is an intelligent young woman with a serious personality. After discovering Naoya, Saki, and Nagisa's relationship she greatly disapproves of it and tries to end it.
Rika Hoshizaki 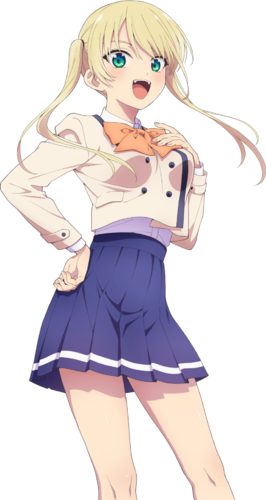