Website / Goodbye Strangers and the Fearful Frontier
aka: STRANGERS 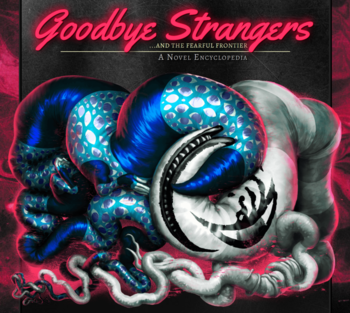 and, bring on the menagerie
Goodbye Strangers and the Fearful Frontier

is an online bestiary/ongoing interactive project that details mysterious, semi-tangible creatures called Strangers. Solid and visible but completely unnoticed to most of the world, they live exclusively in populated areas and cause various weird, often dangerous phenomena all around the world. Chewing wires, clogging gas tanks, inducing stutters, luring people to deserted areas to mangle them beyond recognition... Strangers are mostly disinterested in humans, but their influence is often more harm than good.
Advertisement:

Despite resembling living organisms, they defy any known laws of nature or physics. Possessing no digestive, nervous, reproductive, circulatory or skeletal systems, the exact mechanics of how they work are vastly unknown. Some strangers are completely hollow inside, others are filled with gas, motor oil, human tissue, or other seemingly meaningless substances. Their existence and behaviors largely incomprehensible to humans, the strangers are an alien yet familiar presence, and the few people who can perceive them have to struggle to investigate what they are and why they do these countless strange, unnerving things.

As of April 2021, the website has been taken down due to the project's head dealing with ongoing legal issues. At the time of writing, there are plans for the website to return 'in some form' once the conflict has been resolved, though no date has been given.