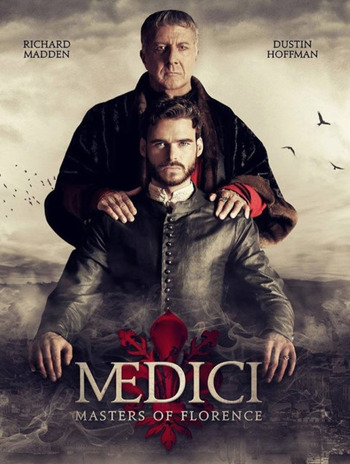 Medici: Masters of Florence is a historical TV series created by Frank Spotnitz and Nicholas Meyer in 2016.

It is a dramatization of the life of Cosimo de' Medici "the Elder" (1389-1464, played by Richard Madden), grandfather to the famous Lorenzo the Magnificent, as he ascends to family patriarch and leader of the wealthy and powerful Medici bank following the suspicious death of his father, Giovanni (played by Dustin Hoffman). Aside from intense personal drama, this highlights the turbulent period when the Medici were becoming, but not yet, kings in all but name over the late medieval / Renaissance era city-state of Florence, with the attendant intrigue and drama.

One 8-episode season has aired on Rai (the channel that produces it) in Italy, Sky1 in Germany, Zive in France and Netflix for English-speakers. A second season has been greenlit.Season 2 focused on the younger years of Lorenzo the Magnificent, and the Pazzi Conspiracy. Season 3 focused on his later life.