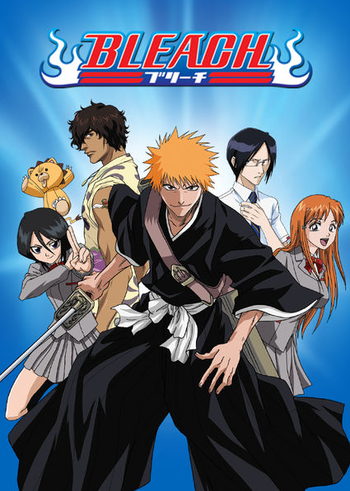 Left to right: Rukia Kuchiki, Yasutora 'Chad' Sado, Ichigo Kurosaki, Uryu Ishida, and Orihime Inoue. Oh, and Kon (between Rukia and Chad).
"We stand in awe at that which cannot be seen."
— Rukia Kuchiki
Advertisement:

Ichigo Kurosaki would have liked to have been an Ordinary High-School Student. Unfortunately, his ability to see and hear ghosts (and his orange-colored hair) kept getting in the way of a normal life. This is all he knows of the spirit world until the day he encounters Rukia Kuchiki, a Soul Reaper (definitely not meant to be confused with Soul Reaver) whose profession requires her to destroy evil spirits ("Hollows") and send good spirits ("Pluses" or "Wholes") to the afterlife. When Rukia is injured while trying to slay a powerful Hollow about to kill Ichigo and his family, she offers the boy a portion of her powers to defeat it in her place. Unfortunately, his abnormally-high amount of spiritual energy absorbs all of her power instead, forcing him to take up her duties until she can recover and return home. What follows is adventures within the realms of the spirit world and facing the dangers that produce them.

That said, this change of direction has led to not only one of the most ludicrous dramatic moments in manga history, but many an awesome moment as well, and its continued popularity speaks for itself. Hell, it even has musicals! For most of its run, it was one of the "Big Three" long-running shonen manga/anime in serialization, and it inevitably gets compared to its colleagues, as well as Dragon Ball (which Kubo is inspired by) and YuYu Hakusho (which shared the same director, and also dealt with supernatural themes). It's also notable for having one of the largest Periphery Demographics in the history of shonen manga — it has not so much an Estrogen Brigade as an Estrogen Legion.

. The anime ran 7 1/2 years, from October 5, 2004 until March 27, 2012, after the completion of the manga's penultimate (Lost Agent) arc, giving way to the Naruto spinoff Rock Lee's Springtime of Youth. In August 2016, after 15 years and 686 chapters, Bleach became the second of the "Big Three" to end. Some plot points were further expanded upon in Bleach: We Do Knot Always Love You and Bleach: Can't Fear Your Own World.

The anime remained an incomplete adaptation for years, ending where Chapter 479 of the manga did. On March 21st, 2020, it was confirmed on the AnimeJapan livestream that the anime would be returning with an adaptation of the final arc, Thousand-Year Blood War. The series is set to air in October 2022.

On August 8, 2021, Weekly Shonen Jump released "No Breaths From Hell" - a 73-page special chapter of Bleach, helmed by Kubo, continuing after the ending of the series and beginning a new arc that involves the Soul Reapers fighting against the denizens of Hell.

The English dub is licensed by Viz Media and aired on Adult Swim (later, Toonami) from September 8th, 2006 and ended its run on November 1st, 2014.