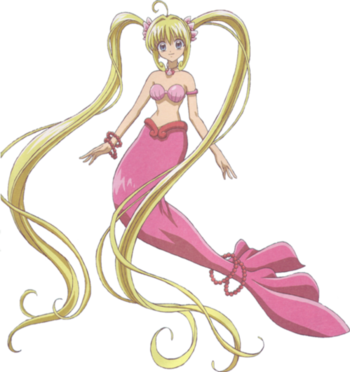 "All these people are doing their best to find true love! I will not let you laugh at it!"

Lucia is the typical shoujo heroine: ditzy and lovestruck, but with a pure heart and a sense of love for her friends.

In the manga, she was raised to believe that she was a normal mermaid civilian, and lived on the surface as a human with her guardians, "sister" Nikora and "pet" Hippo (who is a penguin).

In the anime, she's always known that she is the Princess of the North Pacific Ocean, Pink Pearl Voice. Great, right... except for the "pink pearl" bit.

The pearl that gives her her power and is directly tied to her life force is gone; she gave it to a little boy to save his life when they were six. She gets it back from the boy, who turns out to be her classmate and crush Kaito, and realizes that she has to find the other ocean princesses and save the world. She's also expressly forbidden to confess her love or true identity to Kaito, but she's certain that she won't turn to foam if she finds some loophole. Little does she know that nobody turns to foam when they confess anyway... 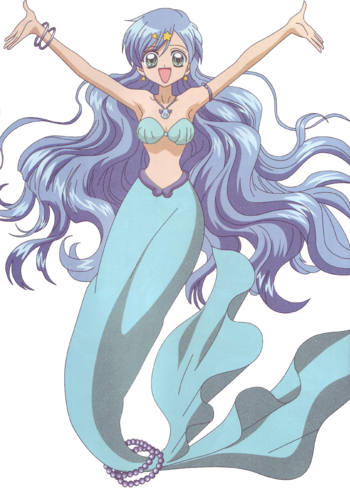 Hanon is a flirty, carefree, all-around girly-girl that befriends Lucia on her first day of school. She's more serious than she looks, however, and has been watching Lucia for days and confronts her with her true identity at the end of the first chapter. Hanon is actually the Princess of the South Atlantic Ocean, otherwise known as Aquamarine Pearl Voice. With her strength and happy nature, she makes a great first ally for Lucia, even though they're always at each other's throats — in particular, Hanon doesn't approve of Lucia dating Kaito at first, even though she's all over a human man, who, at that, happens to be her own teacher. Again, though, despite her peppy, fluffy, hypocritical image, Hanon feels tremendous guilt for the fate of her kingdom, which was besieged with her as the only apparent survivor. 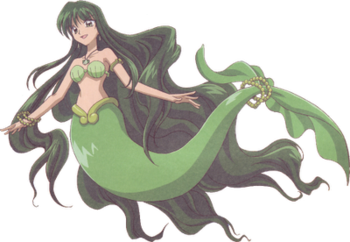 "It doesn't matter. Your true nature will come out soon enough."

The standoffish transfer student that Lucia decides to befriend on a whim, Rina is idolized by her classmates as "cool" because she spends most of her time brooding and making the occasional sarcastic remark. She, too, is a princess: Green Pearl Voice from the North Atlantic Ocean. Rina acts as an emotional pillar for her friends, but she herself has issues that need to be dealt with. Even more so than Hanon, she carries a measure of guilt about her escape; after being forced to leave their countries behind, Rina and her friend, Princess Noel from the Arctic Ocean, were ambushed by Gackto and only Rina got away. Despite what she thinks of herself for this, she's a strong and loyal friend of her team. 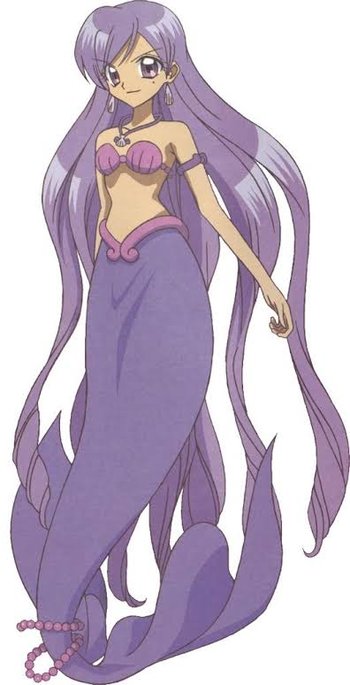 "Who said I'm joining you?"

Brash, bitter and initially unkind, Caren, otherwise known as Purple Pearl Voice and the Princess of the Antarctic Ocean, shows up mid-way through the first arc to rescue Lucia and company a few times. That doesn't, as she makes clear, mean that she plans to join them or become their friend. Caren is the fraternal twin sister of Noel, and as such, has a deep personal grudge against Rina for escaping when the other princess did not. She takes it upon herself to rescue her sister alone, and only when her brazen attempt gets her captured and the heroes rescue her but Noel sacrifices herself again does Caren realize that Rina wasn't selfish at all. She never quite integrates herself into the team for good, leaving more than once after the job's done, but is important enough to be listed with the main cast for the second half of the first arc/season. 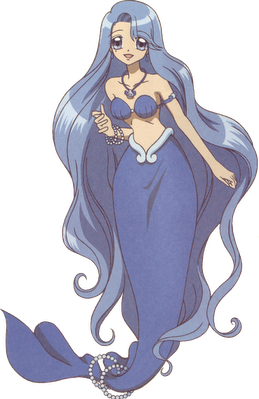 Princess of the Arctic Ocean who was imprisoned by Gackt before the start of the series. Also the twin sister of Caren. 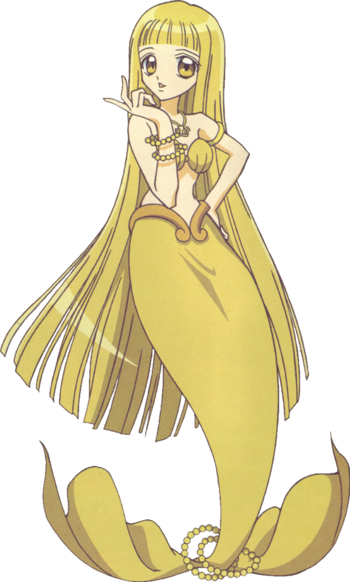 Princess of the South Pacific Ocean who suffered the same fate as Noel, but unlike Noel, the audience doesn't get a good look at her until the end of the first season. 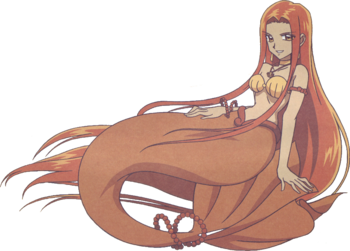 "I want you to fill the seas with darkness as soon as possible, my prince."

Sara first appears as a mysterious figure in Gackto's castle, stealing all his attention from the Dark Lovers and making them jealous. The truth is, Sara has been there all along, directing Gackto from behind the scenes. She does what she wants, when she wants, whether it helps or hinders Gackto's plans, and strings him along to agree with it by flirting and pulling rank, the exact same way he treats his Dark Lovers. Sara has had her heart broken in the past, and no longer believes in love, hope and freedom. Her objective now is to take revenge on all the world, but at times, what remains of her heart can get in the way - which Lucia and company will need to exploit if they want to summon Aqua Regina. 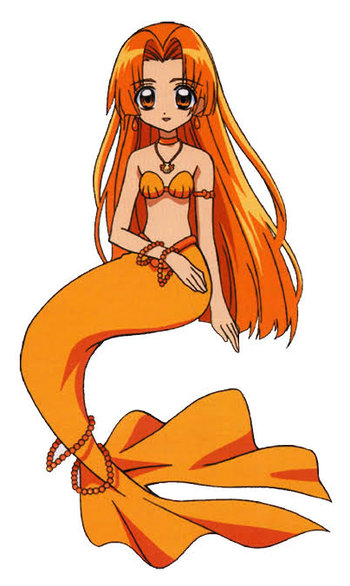 Major first arc spoilers here. Lucia, following Sara's last instructions, took the orange pearl to the Indian Ocean to create a new Orange Pearl Voice. The little girl, Seira, didn't fully emerge before Michel ambushed them and absorbed most of her life force. Now Seira is trapped as a spirit, much like Aqua Regina had been, inside the pearl, and much of the quest of the second arc focuses on getting back the pieces of her heart.