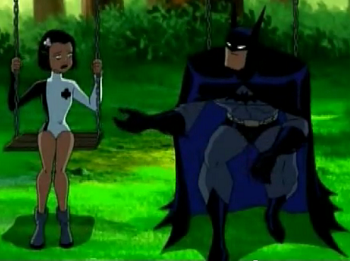 "Could you stay with me? I'm scared."
WARNING: Spoilers are unmarked.
Advertisement:
open/close all folders
Justice League
1x01/02/03 — Secret Origins

1x02 — For the Man Who Has Everything

1x12 — The Once and Future Thing, Part 1: Weird Western Tales