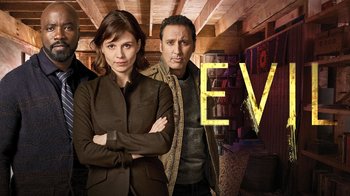 Evil is a 2019 horror/suspense thriller series with elements of mystery and supernatural fiction. It was created by Robert and Michelle King, who previously created The Good Wife. The first season aired on CBS, while the second season onward aired on Paramount+.

The show begins when Kristen Bouchard (Katja Herbers), a forensic psychologist who works for the District Attorney, meets David Acosta (Mike Colter), an "assessor" and priest-in-training whose job it is to investigate so-called demonic possessions and miracles and evaluate if they are actually the result of the supernatural or if there are more mundane answers. Acosta already employs the skeptical Ben Shakir (Aasif Mandvi) as his technical support and when he needs someone to interview a serial killer with him, he gets the Catholic Church to hire Kristen as well.

Kristen is a lapsed Catholic and former mountain climber who retired from climbing to have four children (all daughters) with her husband. But her husband is busy in his job guiding other mountain climbers and she has to pay off her student loans, so she takes the job with Acosta. However, she soon finds herself over her head when she starts getting night terrors involving a demon named George...and a rival forensic psychologist named Leland Townsend (Michael Emerson) reveals that he's a psychopath that pushes others to commit evil.