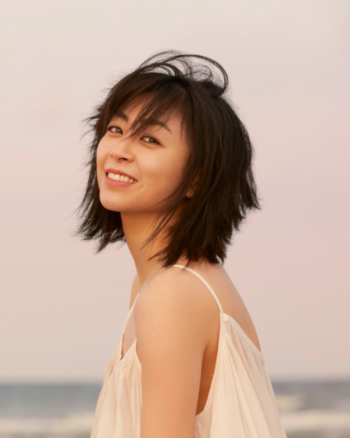 Utada writes and produces almost all of their music, differentiating them from the numerous Idol Singers who don't hold much creative power over their work. Born and raised in New York, Utada is fluent in Japanese and English, and has released two English-language albums for the American market under the mononym, Utada.

In the west, Utada is perhaps most well-known for writing and singing the theme songs of the three main entries in the Kingdom Hearts games — both the Japanese and English versions. Their songs "Beautiful World", "Sakura Nagashi" and "One Last Kiss" are featured in the Rebuild of Evangelion series.

In late 2010, Utada held a pair of "goodbye" concerts before going on hiatus in 2011. The concert was streamed live on the web for the benefit of their foreign fans and others who wouldn't be able to see it in person.

During their hiatus, Utada reportedly focused on "human activities" such as personal development, expanding their horizons and building relationships in their life. Additionally, a number of major events took place in their life. In 2013, they lost their mother, renowned enka singer Keiko Fuji, to suicide, in 2014, they married their second husband, a bartender from Italy, and in 2015 they gave birth to their first son. During this time they also wrote music. In 2016, after 5 years of hiatus, they returned to the music industry with their sixth Japanese album (and ninth overall), Fantôme, which was inspired in part by the events of their life during their hiatus, and dedicated to their late mother.