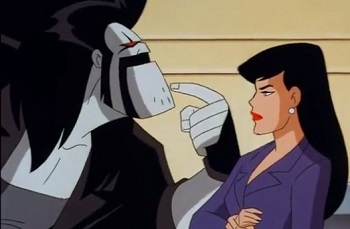 I like a babe who plays rough!
"A little fight in you. I like that."
— The Joker, The Dark Knight
Advertisement:

In fiction, most villains are used to dealing with the Damsel in Distress. They scream, they're easily subdued by grasping their Standard Female Grab Area, they're generally easy to dominate. This can get rather dull if it goes on for long enough.

As a result, the villain tends to be pleasantly surprised when he captures an Action Girl and she puts up a fight. Oh, he'll still hold her hostage. He'll still kill her when the time comes. But when she spits in his face, kicks him in the crotch, and insults him with a witty rejoinder, he can't help but shake his head (perhaps smirking as he does so) and say, "I'll give you this. You got spunk."

That last word tends to vary, since "spunk" is nowadays used as slang for semen, and unless the line is a build-up for a cheesy joke ("And you're about to have even more in you! Hoy-oh!") the double-meaning is just distracting. "Moxie" is a good substitute, as are "fight" and "spirit". This is meant to be a compliment, because hey, we all "love a woman with spirit," but it usually comes off as a condescending Stock Phrase.

This is no longer strictly a man-to-woman trope. Man-to-man examples are not uncommon, where they can either be examples of Ho Yay or genuine respect. It has a much darker and creepier connotation when used in the middle of a rape scene. It may also be used in less extreme situations by someone who's not a villain, merely a grump, in which case they'll make it a backhanded compliment by adding "I hate spunk." Not that real villains can't hate spunk, too.

For the non-villainous version, please see "I Love You Because I Can't Control You". "You got spunk" is more "I will love you because it is hard to control you", and unsurprisingly, has the less pleasant implications. Compare Will Not Be a Victim (for the Action Girl's perspective) and I Have You Now, My Pretty (for the villain's perspective). Often paired with a Villainous Crush. Compare Amazon Chaser for when "spunk" is an attractive quality in a girlfriend. Also compare Defiant Captive. Contrast No Guy Wants an Amazon and No Guy Wants to Be Chased for when it is a deterrent. When meant sincerely and in non-rapey terms, it overlaps with Sympathy for the Hero. See also You Got Guts.