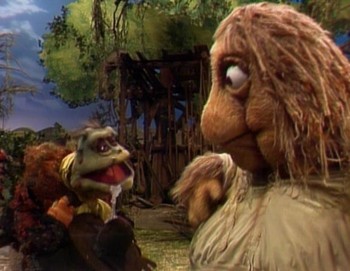 What an honest looking guy.
While Ma and Pa are on their afternoon walk, Wander McMooch, a greedy real-estate developer, comes on the scene and swindles Junior into selling the castle for ordinary peas that he claims are Peas of Power—legend stating that if a Gorg plants one, it'll turn into a Gorg bride at dawn. Mokey and Red, who have been captured, decide to help Junior get back the castle in exchange for their freedom. The plan fails, but when McMooch mentions his distaste for Fraggles, Junior uses this to his advantage and scares him away.