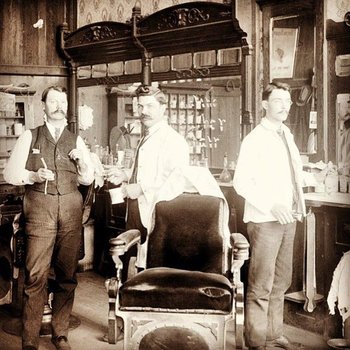 Back in some small towns in the old west, the barber was the only person who had experience handling a very sharp knife (and the association between barbers and surgeons

goes back centuries.) The town might not be big enough to have a physician, so in addition to cutting your hair and shaving you, he might also do some "minor" surgeries, or any major ones where you either didn't have enough time to get to a real doctor, or would probably die from the rigors of the trip. Sometimes was also the mortician since he had to shave the corpses, too. This type of Barber might show up in a "realist fantasy" that has done the research.

In fictional Westerns however Barbers are used primarily as sources of gossip, and a local gathering place outside of the Saloon. Expect the villain to show up and demand a shave before he confronts The Hero, thus allowing the Barber to send a warning to The Sheriff. Occasionally can be reversed.

By ancient tradition, the Barber tends to be extremely talkative, often taking advantage of having a captive audience who can't reply because they've either got a hot towel on their face or a cutthroat razor at their throat.