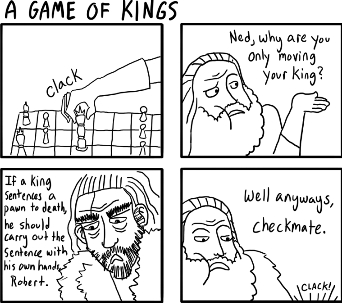 "Shepherd Book always said, 'If you can't do something smart, do something right.'"
— Jayne Cobb, Serenity
Advertisement:

Being a good and honorable person is anything but easy; it requires personal sacrifice that most normal people aren't willing to make, either out of self-interest, self-preservation, selfishness or any other number of reasons.

Heroes who abide by this trope more often than not act in a manner that, although morally sound and honorable, is far from the most practical solution. Quite often this kind of decent, chivalrous behavior will come at a great cost to the hero's happiness, kill them outright, or similarly leave them a destroyed human being. A villain aware of such a gallant hero is bound to use Flaw Exploitation against them as well.

Characters who adhere to this trope are generally more committed to their code of ethics than to their own self-preservation. They believe in a pre-defined set of rules which universally apply, and will not break them, even if their own death results from adhering to them in one particular instance. For them, acting dishonorably is a Fate Worse than Death.

In stories on the idealistic end of the Sliding Scale of Idealism vs. Cynicism, the more the insistence of honorable behavior seems impractical, or even insane, the greater the chance that it becomes the thing that turns a hopeless situation into victory. In stories on the cynical end, however, this trope will overlap with Too Dumb to Live.

An especially poignant situation is Turn the Other Cheek. Often, and perhaps running counter to the theme of honor besting all, the hero has to be aided by Big Damn Villains, who are able to cross that final line that their integrity would not allow.

When done well and/or consistently, such acts of decency fan the flames of idealism in the viewers' hearts; they make them cheer even harder for the hero and inspire a desire to be just as pure and honorable. When done poorly, the term "Lawful Stupid" comes to mind, as does Martyr Without a Cause.

This trope is also subject to some degree of Values Dissonance, as some actions will be seen as both honorable and reasonable to a society with a certain set of beliefs. For instance, a society which believes in an afterlife ruled by a Higher Power that judges according to a rigid code of morality would see the "honorable" choice as being also "reasonable" by virtue of the fact that the person making it is sacrificing a temporary advantage in this life for a permanent one in the life to come. As another example, a man may be challenged to a duel over something stupid, but if he lives in an honor society where his peers will refuse to do business with him, not let their daughters marry his sons, etc. if he refuses to defend his honor, then he may feel like he has to do it even if he doesn't care about honor for its own sake.

Often features in I Gave My Word, In Its Hour of Need, Rash Promise, Rebellious Rebel. A trait of the Proud Warrior Race Guy, especially if the culture is based on Samurai or Spartans. What You Are in the Dark always reveals the same character as when they are seen. When a character does this to the point that it angers their more corrupt superiors, expect them to become The Last DJ. The McCoy is the personification of this trope. More Hero Than Thou disputes are sometimes this, when only one character is really suitable for the sacrifice. Can lead to the hero being prone to fall to things like the False Innocence Trick. See also Victorious Loser and Small Steps Hero.

Shoot the Dog is this trope's opposite. It can even be named "Reason Before Honor". Usually not a trait of a Combat Pragmatist due to their dirty approach to fighting often being seen as dishonorable.

If they are lucky, they may be Saved From Their Own Honor.