Literature / Requiem for a Dream 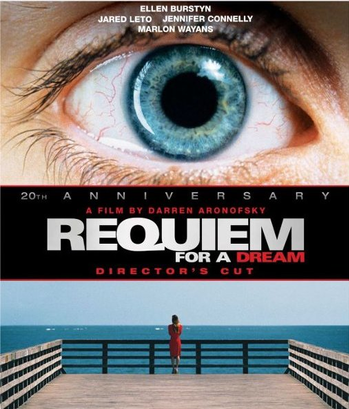 "If you ever find yourself inexplicably contented with your lot, slip this into your DVD player and normal service will be resumed... this is a film you watch once, then retire to the pub to stare fixedly into your beer for the night, vowing never, ever to watch it again."
— Empire's Top 10 Most Depressing Movies (this is #1)
Advertisement:

Requiem for a Dream is a 2000 psychological drama film co-written and directed by Darren Aronofsky. The film revolves around three friends and one friend's mother, who over the course of nine months (summer, fall, winter) experience various forms of drug addiction. The film was adapted from the 1978 novel of the same name by Hubert Selby Jr. (who co-wrote the film's script), which it has considerably eclipsed in terms of public recognition and pop culture impact alike.

Harry Goldfarb (Jared Leto) is a twenty-something Brooklyn drug addict, who routinely steals his long-suffering mother's TV to pawn it for money. His mother, Sara (Ellen Burstyn), is a timid and lonely shell of a woman who lives in a permanent state of denial. Her only concerns are hiding her son's condition from the world as much as from herself, being accepted by the neighborhood's women, and watching a television self-help infomercial show almost continually.

One summer day, Harry and his best friend Tyrone (Marlon Wayans) decide to not just be drug addicts but also drug dealers, with help from Harry's would-be fashion designer girlfriend Marion (Jennifer Connelly). Marion's parents are unaware that she's quit seeing her psychologist (thanks to her occasionally dating the man to keep him quiet), and routinely send her money, which Harry and Tyrone gladly make use of. Harry's dream is to help Marion start her own fashion store — which, he tells her, could be done with the money gained from selling drugs directly.

Meanwhile, Sara receives a phone call stating she'll have a chance to appear on television. Already somewhat mad from loneliness, she becomes fixated on fitting into her favorite red dress for the occasion (the one she wore to Harry's high school graduation). Failing to keep up with her diet, Sara sees a no-questions-asking dealer doctor who prescribes a regimen of extreme diet pills that are heavily implied to be methamphetamine, which she quickly begins to abuse.

Given the film's reputation as one of the most depressing and disturbing films ever made, you can probably infer where it goes next.

Tropes only in the book:

Alternative Title(s): Requiem For A Dream