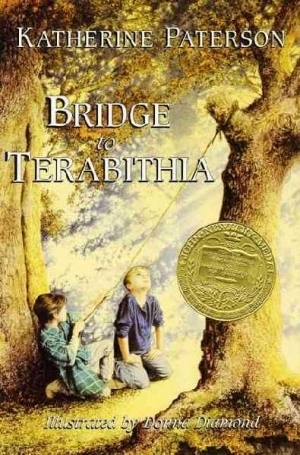 Bridge to Terabithia is a 1977 novel by Katherine Paterson, twice adapted to film, first as a 1985 Made-for-TV Movie for PBS, the second as a 2007 theatrical film produced by Walden Media, and distributed by Disney.

Jesse, the main character, is a young boy who lives in a small rural town, not too far from Washington, D.C. A bit of a loner, he practices running all summer so he can be the fastest in his grade at school. Being the fastest boy sure beats being the quiet boy who loves drawing more than he should. But on the first day of school, his new next-door neighbor, Leslie Burke, completely overtakes him. What starts as resentment and annoyance turns into friendship, an extraordinary friendship, because Leslie is an extraordinary girl. With her gift for words, she and Jesse create a kingdom together in the nearby woods, a castle stronghold to fight imaginary monsters and plot battles to fight real monsters, an adventure that will completely change Jesse's world, a kingdom that they call "Terabithia."

The story has a Bittersweet Ending, and a grade-A example of Death by Newbery Medal (which has reached It Was His Sled levels, though spoilers will be marked here regardless). It has been banned on more than one occasion for a supposed Teacher/Student Romance and other non-existent sexual content note Jesse has a crush on one of his teachers, something everyone who's reached the age of 12 can probably relate to. She invites him to the museum, and insists on paying on the grounds that she's a liberated woman and invited him (and, more practically, she's a teacher and can afford it better). That's literally as far as it goes — there's zero evidence that said teacher has any inappropriate feelings or is aware of his crush. as well as religious content and some swearing.

The movie contains examples of the following tropes