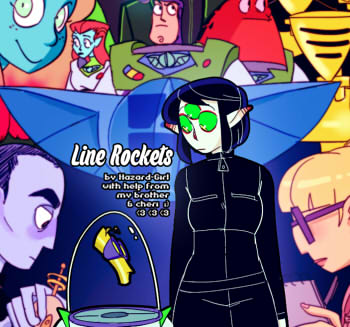 I want to be wrong, but no-one here wants to fight me like you do.
"So what do you say? A little easy work for a little leeway."
— Contractor

Line Rockets is an in-progress Buzz Lightyear of Star Command fan comic about a convict named Jax who, in exchange for early release from prison, agrees to assist Star Command in infiltrating and taking down a drug ring she used to be a part of. You can read it here,

The other major players include:

Through a Contrived Coincidence XR, who Jax is not fond of, becomes Jax's partner; and the two are forced to put up with each other for the duration of the mission.

WARNING! This page contains spoilers! They are under spoiler covers, but because this comic is in-progress, if you read them you will still have to wait for them to come to be in the comic itself. I recommend not actually looking at them. I mostly made this page so I could keep myself on track! - hazardgirl 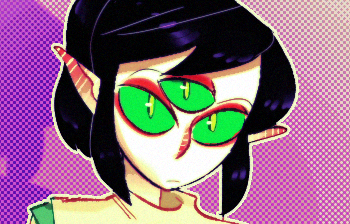 "Oh, cry me a river! I'm not pushing you around! I just need you to stay out of my way."
Jax, A former criminal who used to work for Zod, but was captured. She was in prison for five years before the start of the story, where she is given leave from her seven-year sentence to help take him down. If she is successful, she won't have to worry about being hunted by him when she is released, and she will gain early parole. Or that's the idea, anyway. 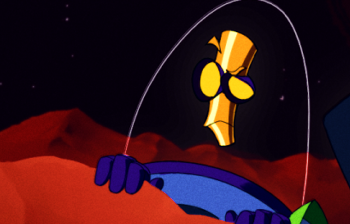 "And my team... they're all good people, and I'm not like that. So if I need to get knocked around a little so they can save the galaxy over and over again, it's a small price to pay. And anyway, I like being a part of it."
XR, Star Command's only robotic Space Ranger. Up until this point he has worked exclusively with Team Lightyear. If you need to read this character page to know who XR is, chances are you're not going to understand a big portion of the comic. He has his own character page on the Buzz Lightyear Of Star Command page, but since he plays a very different role in the comic from the cartoon he has some new tropes of his own for this page as well. 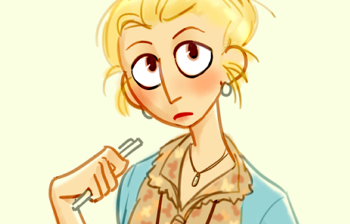 "I appreciate that, sir; but this is my responsibility, and I do prefer to think my credentials mean something."
Enora Cooke, Jax's case worker. Enora genuinely wants to help Jax and seal the gaps between Star Command and the criminals they put away, but it almost constantly met with resistance. Her motivations are unclear but she tries to do the right thing, even if that doesn't always correspond with what others tell her the right thing is. She is a bit socially awkward. While Jax represents the "criminal" side, Enora represents the paper-pushers. 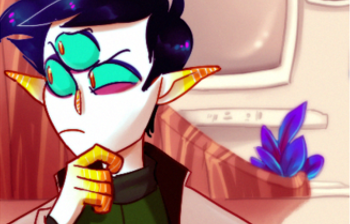 "He has to know this is all in vain. I'm going to find out anyway. I always do."
Ves, Jax's ambitious and ruthless brother. Where Jax has often failed, Ves has often succeeded. He used to run their family's fishing company before it faced some troubles and he dropped it to find morally questionable opportunity on Trade World. He recruited Jax into Zod's gang and is still Zod's right hand. However, he's not fond of orders that don't please him, and Zod knows this, so they must maintain a balance between them. 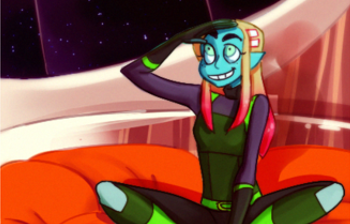 "Aye-aye, Cap'!"
Enif, Ves's bubbly, positive and ruthless right hand. Little is known about Enif's past other than she's a "blue-blooded" Tangean, she's very young (though nobody knows how young) and she is an extremely high-functioning individual. Despite this mystery, she has a huge presence in the Parhelia, and often acts as Ves's eyes, ears, and even voice. She seems to thoroughly enjoy her job, and gets along well with just about everyone. She's good natured, silly and helpful. However, she's not nearly as laid-back as her attitude suggests, and everybody knows it. She's domineering, sharp as a knife and extremely intelligent. 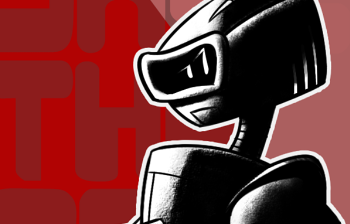 "I don't care whether or not people are aware of it... I may be 'man-made' but I'll be damned if I'm going to go around calling myself 'servant'. Organics may have given us life, but it's no charity."
"Primus", Formerly known as Autopilot 99. Alleged robot supremacist, really all he wants is a little justice. Primus has been a part of the Parhelia for over five years, and is head of security. However, recently there has been an extreme amount of strain between he and his superiors. Zurg's new army includes intelligent hornets, which he sends to attack the Parhelia almost daily with the war on their heels, and the Parhelia shoots them down like they would any other intruder. Primus obviously has some very strong reasons for fighting against this. They're sentient robots, and so is he. He can't shoot down his own kind! And asking him to do so is madness. Of course, the Parhelia would kill any intruders, organic or otherwise, sentient or non-sentient, but Primus never really thought about the moral implications until it started to affect him, personally. 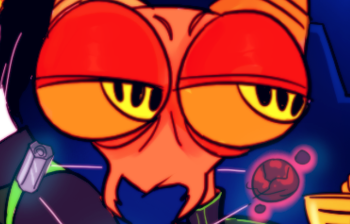 "Fear is a powerful tool, Jax. Use it."
Zod, The head of a large gang. He used to be the head of a drug ring on Trade World, and employed Ves and Jax as his lieutenants before Jax was caught by a rival gang, then arrested. In the five years Jax was in prison, Zod has developed an empire and absorbed multiple gangs into his command. His motives are currently unclear, but he has a suspiciously strong grip on the mission Jax and XR have been sent on by Star Command.