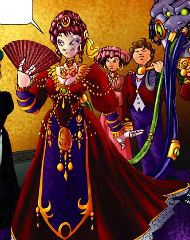 Tarvek's debatably-living sister. After an ill-conceived Mad Science experiment of her father's left her at death's door, her brother constructed a new robotic body that she could operate from within her life-support tank. "Oh yeah! Klaus always knows where the party is!"

A pirate queen in the pay of the Baron, though even he finds her taste for violence and random slaughter distasteful. Nevertheless he keeps her about as she is a very skilled warrior and hunter and sometimes, you need a butcher.

The Beast of the Rails 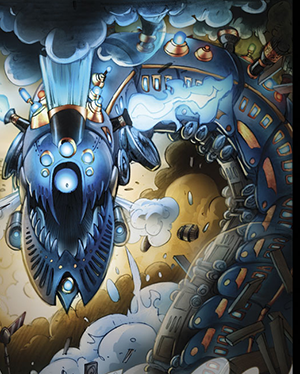 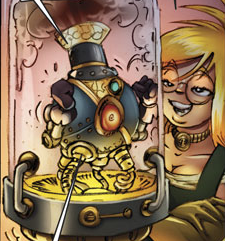 A sentient train that was created by Agatha's grandfather Saturnus Heterodyne. It constantly hungers for coal and any form of metal, and to roam freely across the land devouring new and interesting things; after Saturnus gave the Beast to them, the Corbetite Monks tried to use it on their railway network but were finally forced to trick it and seal it in one of the Vaults in their Depot-Fortress. 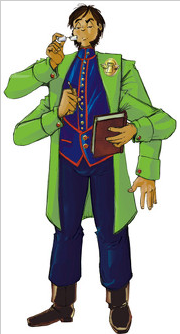 "That means I'll have to run things. And I hate running things."
The head of The Baron's administrative staff, Boris is a microcosm of how the Baron operates, and why it may be preferable to the previous system.

Originally a librarian with an eidetic memory serving a Spark (far from a calm profession in and of itself) his master decided to add an extra pair of arms, strength, speed, balance... and turn him into the ultimate juggler. When the Baron took down his former master, he was given a far less demeaning job. He is now the Baron's right hand man and chief administrative secretary.

This is a job that he has excelled in. His brilliant and utterly humorless mind and enhanced physical abilities make him exactly the sort of person that a man like the Baron would need at his side, showing the Baron's talent for getting the right monster for the right job.

He and the Jägers have a love/hate relationship, as in: They love to pick on him, he hates their attitude.

An English Spark and member of the Queen's Society, who is one of Lucrezia's spies in the organisation. She's been working on reactivating one of the Queen's Mirrors, to help speed up the Other's invasion of Europa. It is later revealed that she actually despises Lucrezia and ends up betraying her.
Ferretina

The main antagonist of the "Revenge of the Weasel Queen" side story.
Advertisement:
Geisterdamen
Mysterious pale ladies from Places Unknown, who ride giant spiders and serve the Other.
Klaus Wulfenbach "I swear, it's like running a kindergarten."
A former friend and traveling companion to the Heterodyne Boys, Klaus disappeared shortly before Agatha's parents married and returned several years later to find Europa in utter chaos. He restored order to the continent, not by negotiating and being nice like his vanished friends, but by imposing his Iron Will on an ever increasing area of the globe.
Madwa Korel

The master of a rogue Smoke Knight cell that still serves The Other even after Grandmother divested the Knights of Jove cabal of her/it/them and all followers. 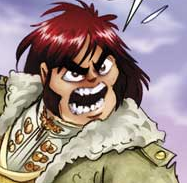 A cousin of Tarvek and the self-proclaimed Storm King.
Othar Tryggvassen 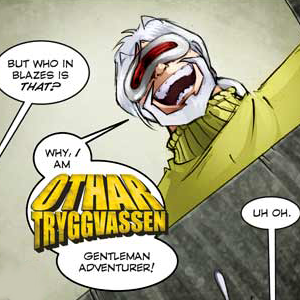 A man possessed with a quest to eradicate all Sparks, including himself (eventually), for the damage they do to the world. Harder to kill than James Bond.
Advertisement:
Quintillius Snackleford

An important official in Queen Albia's Society of Mad Scientists.

Assistant and second-in-command to Tarsus Beetle. 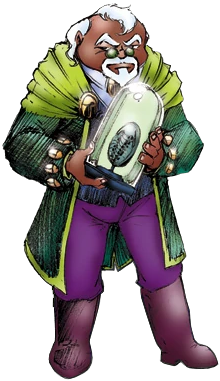 "Know Enough to Be Afraid"
Ruler of Beetleburg and Headmaster of the Transylvania Polygnostic University. Agatha attends TPU under his supervision and acts as his assistant.
The Other

The mysterious force of mysteriousness that almost conquered Europa before vanishing mysteriously. May be Agatha's mother.

Tropes associated with The Other:

Lucrezia Mongfish is from a long line of cheerily sociopathic Sparks, known specifically for their skill in biology, and is Agatha's mother. She was a long-time antagonist of the Heterodyne Boys before giving up her father's work and marrying Bill. She was apparently kidnapped when the Other attacked Castle Heterodyne and killed her infant son (signaling the start of the attacks), but returned twenty years later when her mind was downloaded into Agatha's brain. She seems to be the Other (an interpretation Klaus agrees with), but the situation remains unclear. 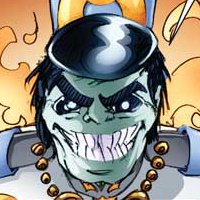 IT VILL BE GLORIOUS!!!
The only Jägermonster ever to be kicked out from the Jägers. He bears a strong grudge against the House of Heterodyne over this, and is eager to kill Agatha as soon as he discovers that she's a real Heterodyne.
Zola Dorée

Zola La Sirene Dorée, AKA Zola "Heterodyne", AKA Zola Anya Talinka Venia Zeblinkya Malfeazium, AKA The Queen of the Dawn Once everyone had heard there was a Heterodyne girl running around, she stepped in (along with a conspiracy) to provide one. Agatha was... not happy about that.