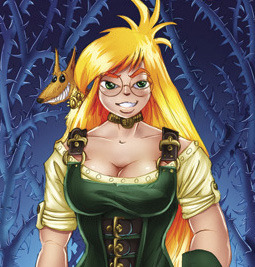 "People keep giving me rings — but I think a small death ray might be more practical."
The titular "Girl Genius", a Spark, raised by Parental Substitutes Adam and Lilith Clay. The story begins with her breaking through when the locket suppressing her abilities is stolen.
Advertisement:
Ardsley Wooster

"Destabilized Britain's greatest rival, and aided an innocent girl. A mighty good day's work, I'd say."
Wooster first met Gil in Paris and agreed to enter his service as a manservant. He claimed not to know Gil's true identity at the time, and was apparently very surprised when he found out. However, Wooster turned out to be more than a Jeeves; in reality, he was a secret agent for British intelligence, and therefore likely DID know who Gil was, which is very impressive seeing as Gil's childhood friends didn't. Turns out Gil knew Wooster's real identity, and was perfectly willing to go along with the pretense until events pushed him into making use of his knowledge, turning Wooster into his semi-minion and dispatching him to help Agatha. Wooster eventually convinces Agatha to come to England with him.

Classy and unflappable Wooster's ultimate allegiance is of course to the immortal and sparky Queen Albia of England, but he thinks well of Agatha, has indeed assisted her on more than one occasion, and has given every indication of being as honorable a man in his profession can be, leading to his being listed here on the Protagonists page.

Oggie, Maxim, and Dimo
Fan Nickname for the three "wild" Jägermonsters. They were detached from the rest of their kin and sent out on a suicide mission to find an heir to the Heterodyne family so that the other Jägers could serve and be under the auspices of Baron Wulfenbach without having forsaken their oath to the Heterodynes. To their surprise, they discovered Agatha passing by in Zumzum, and followed her to protect her.

The leader by default, due to being the smartest of the trio. Often the Only Sane Man as well. 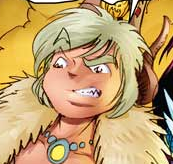 One of the few Jägers known to have descendants, and a surprisingly competent sweet-talker. 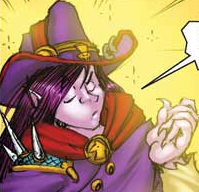 The prettiest of the trio, and mostly human except for his purple skin. 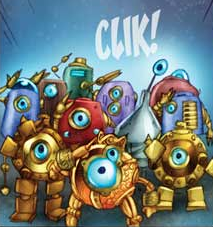 The Dingbots are a horde of small clanks (roughly the size of a large pocketwatch) created by Agatha that prove to be immensely useful in a variety of roles. The original Dingbots created by Agatha herself (such as the fan-named "Dingbot Prime", created in her sleep aboard Castle Wulfenbach) appear to have the Spark, as they are able to create more Dingbots (though with diminishing returns in quality).
Gil Wulfenbach "I am Gilgamesh Wulfenbach, little man, and there is NOTHING I could not do, had I cause!"
Son of one of the major antagonists, Gilgamesh is one of the possible pairings for Agatha, and has much more obvious motivations.
Ivo Sharktooth 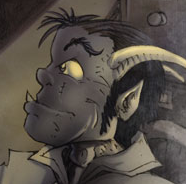 Clients vos sumting hy'd heard about vunce...
Protagonist of a short story set after the end of the main comic, Sharktooth is a Private Jäger, that is to say a full blown hard boilded gumshoe PI, who just so happens to a Jägermonster. He only has one rule, you can hire him, but you can't unhire him. Once he is on the case he won't stop looking, no matter what dirty secrets he throws into the light or how much you beg.
Advertisement:
Krosp I

Krosp I, Emperor of all Cats

"I like him. He thinks like a cat!"
Created by the Spark, Dr. Vapnoople, to control cats to act as a spy network, Krosp I is a failed experiment with delusions of lordship who has given Agatha much valuable political advice. Or possibly not so failed after all..
Lars

A former cheese maker's apprentice who joined Master Payne's Circus of Adventure as an actor and as an advance man. He was one of Agatha's closest companions in the first half of the comic.
Moloch von Zinzer

"I am nobody's happy little helper, you got it?"
A mechanic who served in army of a Spark beaten by Klaus and ended up "on the beach" after his Walking Tank ran into Bang's team. First met right at the beginning when he and his brother steal Agatha's locket. He is later mistaken for the Spark that created Agatha's first clank. He turned up again in Castle Heterodyne and seems to have fallen into the role of Agatha's minion by default.
Punch and Judy

Punch and Judy, AKA Adam and Lilith Clay, Surrogate Parents

A pair of constructs the Heterodyne Boys' earliest creations, Punch and Judy are common characters in Heterodyne stories. As student work, they are both somewhat flawed; Punch lacks a voice and Judy has mis-matched eyes, although most people don't know that. Punch is often portrayed as a foolish klutz, but Da Boyz report that he is a very intelligent and cunning planner as well as a funny and kind-hearted individual who spent his spare time making toys for children. They were loyal and were given the job of looking after Agatha under the pseudonyms of Adam and Lilith Clay.
Tarvek Sturmvoraus "If you don't like the rules... Change the game."
First encountered when Agatha travels through the city of his father, Tarvek is the the Prince of Sturmhalten, and a descendant of the legendary Storm King. He's seemed to be on everyone's side, playing everyone against everyone else, though later he seems to be genuinely on Team Agatha. He is a powerful Spark and a keen intellect. The other possible pairing for Agatha.
Advertisement:
Violetta Mondarev Violetta is a Smoke Knight, although she herself says she's not very good at her job. She's also a member of a cadet branch of Tarvek's family. Her job is to keep Tarvek alive, which is proving to be far more difficult than it should be considering he was confined to a hospital bed when she took that duty.
Zeetha 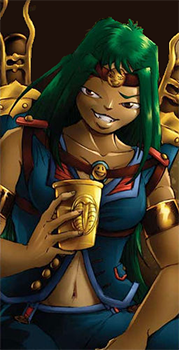 "And yes, I know what 'Chump' means in your language."
Warrior princess from the lost city of Skifander, she no longer knows how to get back and, until Agatha mentioned it, was uncertain as to whether her homeland even existed. She has trained Agatha to be a warrior and still fights for her interests.