What An Idiot / SpongeBob SquarePants 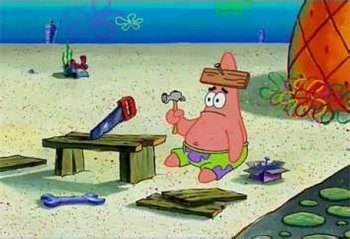 "Well, that's our story. Yes, they are all idiots, aren't they?"
— French Narrator, "Nasty Patty"

Let's face it; most of the plots throughout SpongeBob SquarePants tend to happen because of some stupidity on the part of the characters. And with the exception of the rare infuriating episode, this is hardly a bad thing; after all, how else would we have such funny episodes?

Seasons 4- 9 A
Seasons 9 B-present
Other Media