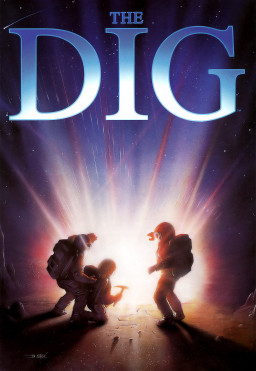 This can't be good.
The Dig is a Science Fiction graphical Adventure Game developed by LucasArts, released in 1995 and based on an idea originally pitched by Steven Spielberg. Unlike other wackier adventure games by LucasArts, this one has a much more serious tone, in addition to being a hard science fiction.
Advertisement:

The game starts when an asteroid appears, seemingly out of nowhere, on a collision course with Earth. NASA sends a shuttle mission to the asteroid to plant nuclear charges in the hopes of deflecting it into a more stable orbit. The mission is an apparent success, but on a standard EVA to survey the "new moon", the astronauts discover that the whole asteroid is an artifact manufactured by intelligent beings, and inadvertently activate a device that transforms it into a starship, which whisks them off to a distant star system in the blink of an eye.

The three astronauts who make the journey - The Stoic Commander Boston Low (Robert Patrick), Omnidisciplinary Scientist Dr. Ludger Brink (Steve Blum) and Investigative Journalist Maggie Robbins (Mari Weiss) - find themselves on an alien planet, littered with the ruins of an ancient civilization (and a few previous abductees), with no apparent way to get back home. They must find a way to survive both the hostile alien environment and their own interpersonal conflicts while searching for a clue to the fate of the planet's original inhabitants.

A novelization by Alan Dean Foster, was included in the box with some releases of the game. If you're getting the game these days, however, it's more likely that you'll be getting the game without a box of any kind, since today it is sold by LucasArts on Steam. (The GOG.com DRM-free version, though, includes the manual.) The game, however, had dialogue written by well-known sf writer Orson Scott Card and by designer-director Sean Clark. Card also developed detailed backstories for the main characters, which appeared in Foster's novelization.