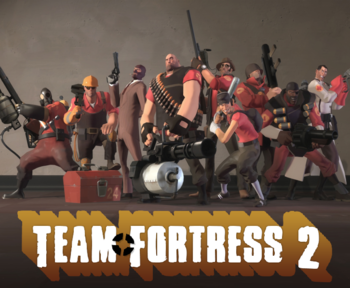 Meet the RED team. They're like the BLU team, only red.note from left to right: Pyro, Engineer, Spy, Heavy, Sniper, Scout, Soldier, Demoman, Medic. Not pictured: Many more hats and other items.
"Welcome to Team Fortress 2. After nine years in development, hopefully it will have been worth the wait."
— Gabe Newell, in developer commentary.
Advertisement:

A sequel to the classic Half-Life 1 mod Team Fortress Classic, itself based on Team Fortress (a popular mod for Quake), Team Fortress 2 has the kind of story a multiplayer-only shooter should have: interesting settings, awesome character classes that each have a distinct personality and can be easily recognized just by their silhouette, and an Excuse Plot that stays All There in the Manual. Said plot, in all of its glory, is "The other side is the enemy, and vice versa. You've been hired to mop the floor with their asses." For the average player, it really doesn't get any more complicated than that. Crack that manual open, though, and it's a different story...

Team Fortress 2 is about a group of average, everyday, working-class mercenaries. Some of them work for the heroically-evil demolition company Reliable Excavation & Demolition (RED), founded by Redmond Mann; some work for the evilly-heroic Builders League United (BLU), a construction company founded by Redmond's twin brother, Blutarch. Both Mega-Corps are fronts for two opposing intelligence organizations, which each control one-half of the world's governments. Both organizations are given combat intel by the same Administrator, who supplies them with weapons provided by Mann Co. (a company which the twins' father left to the Australian Hale family), which is a subsidiary of The Administrator's own company, TF Industries. The Administrator is heavily implied to be masterminding the entire conflict, all in a Thanatos Gambit by the brothers' deceased father as punishment for their imbecility. Other developments include Australium, a strange element mined in Australia that turns those exposed to it into manly, ridiculously strong geniuses, and Gray Mann, the long-lost third brother who's actually not a moron.

Since multiplayer games have a tendency to devolve into slapstick and comedy regardless of their setting, the Team Fortress 2 developers decided to cut the middleman and make their game a living, breathing, playable comedy. The maps would fit right in a typical James Bond work, the music has a '60s spy movie feel to it, and the characters look like they stepped out of a very violent Pixar movie. Both RED and BLU teams use the same models, with only Palette Swapping to show team affiliation. The characters were intentionally designed to be distinctive as possible, even giving each class its own distinctive accent, making it easy to identify another player's class, weapon, and team affiliation in short order. Maps are likewise designed for easy navigation, with BLU incorporating concrete and steel, RED using wood, brick, and sheet metal, and each team's section being textured primarily in their respective colors.

When a character is killed, they respawn at a certain location on the map after a few seconds' delay. This happens frequently, as characters tend to get shot, stabbed, burned to a crisp, or blown to kingdom come time after time.

Valve have regularly added major content updates for free, including achievements, bot support, custom weapons, maps, and balance changes. The Gold Rush (Medic) Update introduced the concept of weapons other than the default, which can now be randomly found after a period of time. They (generally) act as a situational sidegrade to whatever function the default weapon performs. The Sniper vs. Spy Update also introduced cosmetics, which drop the same way but at a much lower rate. They don't do anything but look cool, though players like to show off their wealth. With any new update, players can expect a massive Broken Base.

Example of:
The Medic