Tear Jerker / The Legend of Korra 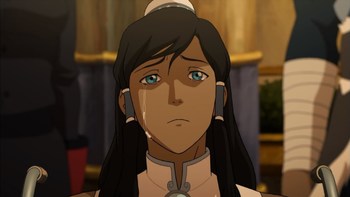 Broken Tears don't even begin to describe it.note Poor Korra...
"It will be just like the good old days."
—Tarrlok
Advertisement:

Sometimes, The Legend of Korra just makes us tearbend.

Welcome to Republic City
A Leaf in the Wind
The Revelation
A Voice In The Night
Advertisement:
The Spirit of Competition
And The Winner Is...
The Aftermath
When Extremes Meet
Out of the Past
Turning the Tides
Skeletons in the Closet
Endgame