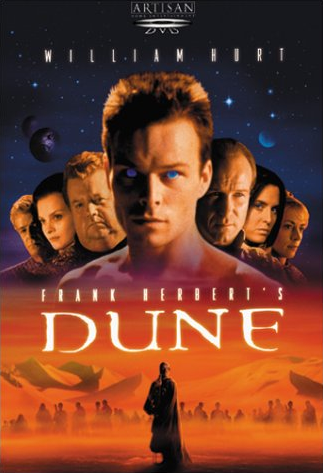 "And so it begins. The trap is set. The prey approaches. A glorious winter is about to descend on House Atreides and all its heirs, and very soon, the years of humiliation visited upon my family will finally be avenged."
— Baron Vladimir Harkonnen
Advertisement:

The Dune miniseries, billed as Frank Herbert's Dune, is a three-part television adaptation of the 1965 novel Dune by Frank Herbert. The novel is often credited as "the masterpiece of science fiction" and is famous for the interweaving of politics, economics, and religion in its action/adventure plot, much of it drawn from real-life global politics of the 18th and 19th centuries. A German-Italian co-production miniseries aired in the year 2000 on the Sci-Fi Channel.

In the galaxy-spanning Galactic Empire of the far future, the Atreides family are ordered by the Emperor to move from their traditional homeworld of Caladan to Arrakis, also known by the sobriquet 'Dune'. Arrakis is a desert world that is the only source of spice, the single most valuable resource in the galaxy. This transfer is officially a promotion and reward for the exemplary service and loyalty of Duke Leto Atreides, but everybody can see that it is part of some plot by the Harkonnens, the ancestral enemy of the Atreides and the former rulers of Arrakis. With no choice but to walk into the trap in the hope of avoiding its pitfalls, the Atreides move to Arrakis and try to forge an alliance with the native Fremen and survive the scheming of their enemies.

William Hurt stars as Duke Leto, who despite top-billing is only in about the first third of the story. Newcomer Alec Newman stars as Leto's son, Paul 'Muad'Dib' Atreides, with Ian McNeice as Baron Harkonnen and an international cast of supporting actors.

Its $20 million budget was small for a sci-fi blockbuster, but was almost unprecedented for a series intended for an initial TV release. It received a significant marketing push (including full theatrical trailers) as the Sci-Fi Channel tried to break into serious made-for-TV production. After the success of this project, the Sci-Fi Channel began producing high-budget miniseries on an annual basis.

While it was made on a much smaller budget and scale than the 1984 film version, the miniseries is generally praised for taking fewer liberties with the story and staying truer to the original book. This adaptation is sometimes referred to as "the one with the hats" because of its use of flamboyant costume design to distinguish between the different factions within the story.

Widescreen Games developed a Video Game Adaptation — also titled Frank Herbert's Dune — in 2001, published by Cryo Interactive, the developers of the original Dune game based on the 1984 film.

Gurney Halleck, thinking the Lady Jessica was the traitor, tried to kill her. He is horrified and over come by guilt to find out she wasn't.

Gurney Halleck, thinking the Lady Jessica was the traitor, tried to kill her. He is horrified and over come by guilt to find out she wasn't.