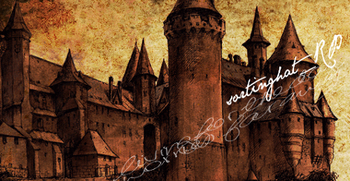 Sorting Hat is a pan-fandom Extranormal High School A.U. Journal Roleplay community set in Hogwarts, during the years of Voldemort and the Death Eaters' rise to power. Each member applies as a character from any fictional medium and plays him or her as a student or teacher in Hogwarts, as the game focuses on the cast's day-to-day life in the school. Every two weeks, a random event will happen and cause either hilarity or bring out the trauma and angst that almost every student secretly has.

It was started in 2005 and lasted for eight years before fizzling out in 2013, making it one of the longer-running roleplays. It can still be read here.