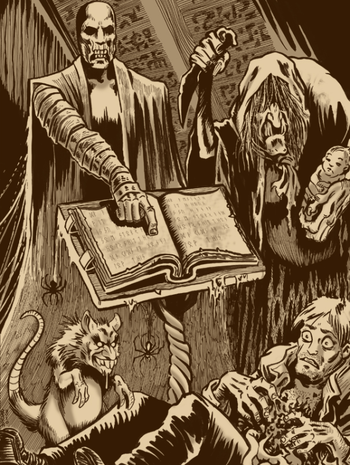 Nyarlathotep (upper left) & Keziah Mason (upper right)
"And it was then that Nyarlathotep came out of Egypt. Who he was, none could tell, but he was of the old native blood and looked like a Pharaoh. The fellahin knelt when they saw him, yet could not say why. He said he had risen up out of the blackness of twenty-seven centuries, and that he had heard messages from places not on this planet. Into the lands of civilisation came Nyarlathotep, swarthy, slender, and sinister, always buying strange instruments of glass and metal and combining them into instruments yet stranger. He spoke much of the sciences—of electricity and psychology—and gave exhibitions of power which sent his spectators away speechless, yet which swelled his fame to exceeding magnitude. Men advised one another to see Nyarlathotep, and shuddered. And where Nyarlathotep went, rest vanished; for the small hours were rent with the screams of a nightmare."
—H. P. Lovecraft, "Nyarlathotep"
Advertisement:

The Cthulhu Mythos and related works have plenty of monsters, both human and otherwise.

Entries for each section are by publication date.

Due to the difficulty in determining which works are set in the Mythos, only examples from Literature are included here. Other works based on the Mythos can be found at their respective media pages, or, in the case of Call of Cthulhu, here.

open/close all folders
Mythos itself
Advertisement:
Anthologies
Others