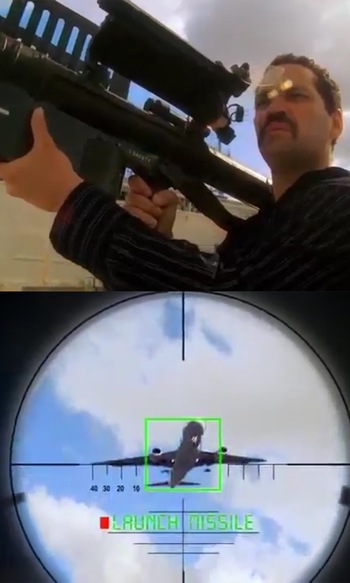 Antonio Riaz takes a shot at playing with rockets.
Trent Reager: A few months ago, I saw this guy out on Third, tripping on acid. He was, like, out of his mind, and it was just so so weird. And that is when I came up with that rig for the bathroom. You have to admit it is pretty clever.
Captain Jim Brass: Five people are dead, one is in the hospital.
Reager: Hey, I just put the gas in the car okay? They're the ones that crashed it. Come on you've got my tapes; you've seen 'em. That first dude, hacking his legs off. Or that teacher oh, and the homeless guy. I mean, the dude is already a total mess, and then the lady has all those dolls! I mean, that was a gift. Or the poor Mexican guy killing his wife. Honestly, I didn't see that coming. I mean, that that that was awesome.
—CSI, "Check In and Check Out"
Advertisement:

As gritty crime dramas, it's not surprising the series that make up the CSI-verse have quite a few monstrous villains.